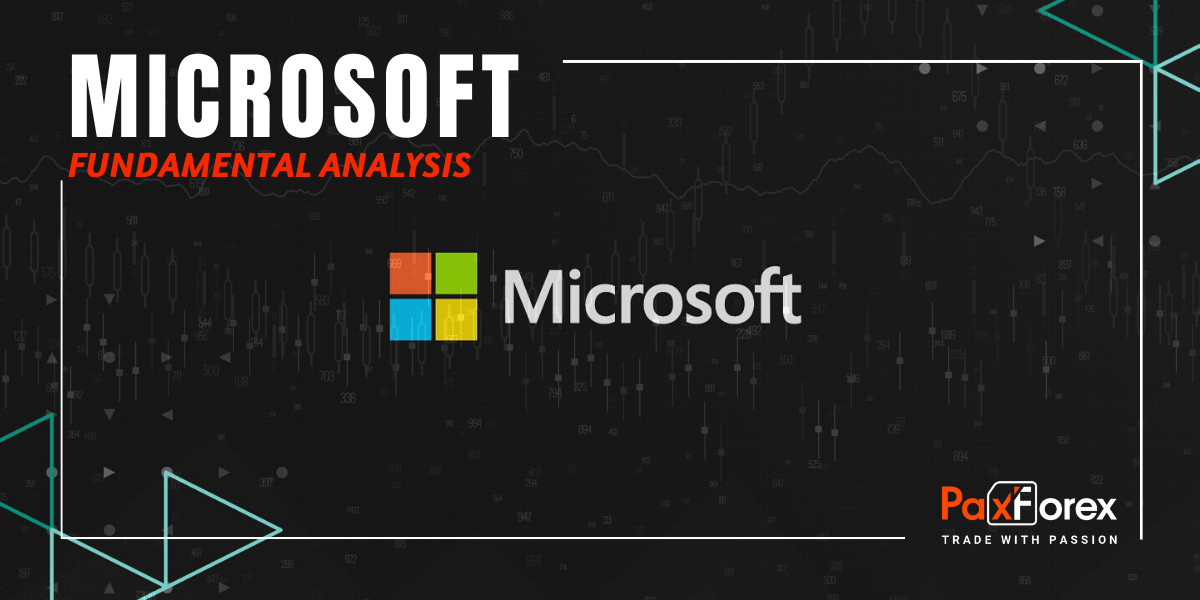 Last week, Microsoft showed better than expected fourth-quarter financial results despite the problems caused by the pandemic. Besides, with the help of enormous investments and a victorious shift to cloud computing, the technology titan will continue to develop in the long run.  Coronavirus harmed some Microsoft businesses during the last quarter. For example, with the vulnerable labor market, the social network LinkedIn (bought in 2016 for $26.2 billion) increased its income by only 11% year-on-year in constant currency, compared to 28% a year earlier. Also, search engine advertising revenue fell 17% year-on-year due to lower ad rates. However, other companies have benefited from the stay-at-home policy. For example, with annual revenue growth of 68% in currency, console, and services Xbox was the highest activity of Microsoft in the last quarter. During 2020, the business grew its earnings to $143 billion, up 13.6 percent year on year, and with solid increase in three divisions. Not surprisingly, cloud computing companies increased their revenue. Satya Nadella, the CEO, spoke about revenue from the cloud in the company's latest report, remarking that Microsoft Office 365 Commercial, Microsoft Azure, and other cloud companies exceeded revenue of $50 billion in 2020, compared to $38.1 billion the previous year. Based on the average revenue guideline, revenue growth for the year should slow to 7.7% in the next quarter. However, given the scale of Microsoft, this revenue increase is still majestic, as it resembles more than $2.5 billion of additional revenue in just three months. And in addition to these short-term estimates, the firm is ready to continue developing in the long term.  A study conducted by Grand View Research forecasts that by 2027, revenues from the cloud computing market will grow at a compound annual rate of 14.6%, and Microsoft should at least match this growth. As per Canalys, Microsoft Azure improved its market share to 17% in the cloud infrastructure market in the first quarter, compared to 15% a year ago. And in the last quarter, Azure's revenues grew by 50%.   Microsoft increased its operating profit to $53 billion in 2020, compared to $43 billion a year earlier. And with $73.2 billion in cash and short-term investments exceeding its total debt, the technology giant, is insured opposite financial challenges in the long term. This year the company acquired Affirmed Networks to enlarge its presence in the growing 5G market.

Consequently, the market values the company at a high price-quality ratio (P/E) for 12 months, equal to 36. And if we take into account the analysts' estimates for the fiscal year 2021, this indicator will drop to 32. The multiples-to-sales ratio of Microsoft shares has been growing over the past few years, despite the smooth growth in revenue. This versatile development is due to the increase in operating profit of the company as it grows. However, maintaining double-digit revenue growth in the long run at this scale will be a challenge, which should limit the potential for operating margin growth, which has already reached a high level. Consequently, notwithstanding Microsoft's phenomenal operating performance over the past few years, traders should remain on the sidelines. Given its rich cost and the likely slowdown in revenue growth due to its huge scale, the upside potential of Microsoft shares seems poor, even if the company continues to show good returns.