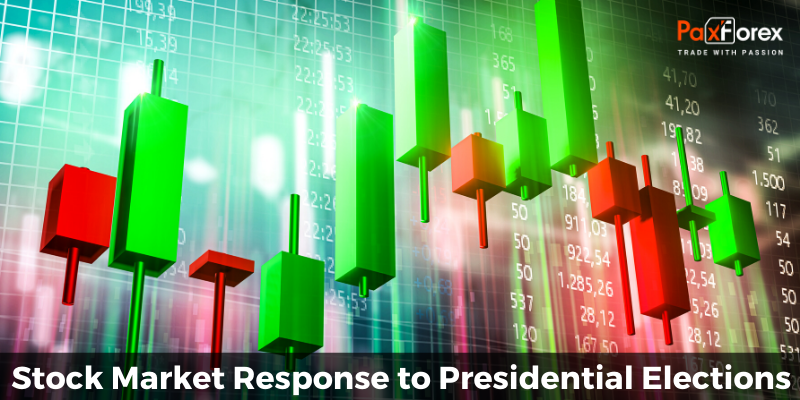 In this article, we will discover why is it so beneficial to pay attention to the stock market during the elections, will learn how the market did, and can react to particular results, as well as will find out how a retail trader can trade stock market response to election.

Why Focus on the Stock Market During Elections?

The value of shares on the market may depend on many external and internal factors. One of the main internal factors is the net profit generated by the company's activity, as well as net cash flow from operating activities, which indicates the presence of free resources for investment and financial activities and overall performance of the business.

However, it is not always possible to keep everything under control. Often it is external factors that significantly affect stock market quotes. Information is one of the most expensive factors. In the conditions of global informatization of the society, any information appearing in mass media may cause significant fluctuations in the securities market both in positive and negative aspects. Positive news, such as the appointment of a new manager, reorganization, reforming business processes, can cause a bullish response from investors, and vice versa, negative feedback from former employees, and allegations of management's violation of the law can serve as an alarm signal to sell shares.

Another factor that can affect the market is the presidential election in the United States, the world's largest economic power, as the policies set by the presidential administration affect business opportunities and the economy as a whole. There is even a presidential election cycle theory suggesting that the election negatively impacts on the economy and market sentiment.
2020 has been challenging from many perspectives - while there are many reasons why stock markets may face difficulties this year, the uncertainty surrounding the US presidential election also does not add clarity. A new president will be elected in the US in November, but it is too early to guess who will be, and this lack of clarity is bad for the markets. We are now going to learn more about the election cycle theory which should give us some insight (hopefully) on stock market response to presidential elections, as well as how traders can benefit from that. 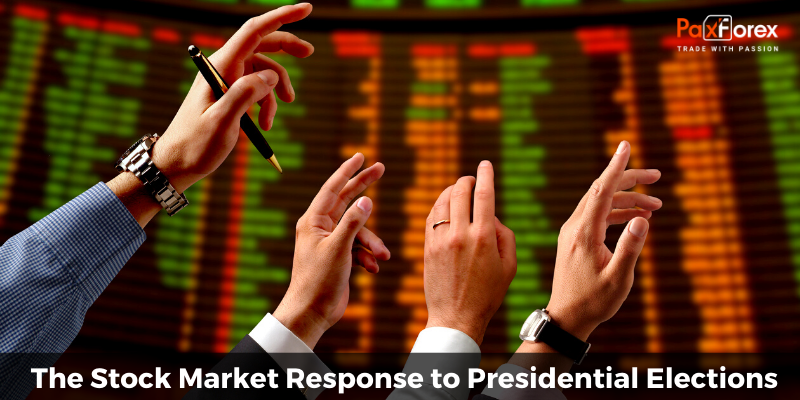 In the late 1960s, the Yale Hirsch theory of a presidential election cycle emerged. Its author revealed the following pattern: wars, recessions, and bearish trends are more frequent in the first half of the term, while the bullish market usually accounts for its second half. Based on this theory, we can not expect the stock market to grow in 2021-2022.

The researchers continued Hirsch's work with a more in-depth study of the impact of the political situation on the U.S. stock market.

Perhaps the most frequently cited works of 2003 by Pedro Santa Clara and Rossen Valkanov in this regard - the yield on shares during the rule of the Democrat presidents is 9% higher than that of the Republicans. Other studies show that the economy is also healthier under Democrats. According to Lubos Pastor and Pietro Veronese, from 1930 to 2015, the U.S. economy under the Democrats grew 3.2% faster.

Scientists' conclusions are not favorable for Trump's second term. But why do Republicans still win the election even though the economy under them is slowing down?

One of the reasons for more positive economic indicators under the Democrats is their risk appetite. It is the conclusion reached by Pastor and Veronese. In times of recession, when there is less interest in risk in the market, voters tend to vote for Democrats who promise social guarantees. Studies show, for example, that a Democrat is more likely to win with high unemployment. When the appetite for risk increases, Republicans have a better chance of winning because voters want more risk in business and demand, for example, lower taxes. In late 2017, Republicans, in particular, decided on one of the most significant tax cuts in U.S. history, which was one of Trump's election promises.

There are many examples in U.S. history that illustrate the Democrats' victory in times of economic decline. In November 1932, at the peak of the Great Depression, Republican Herbert Hoover lost the election to Democrat Franklin Roosevelt. At the height of the crisis in 2008, Republican John McCain lost to Democrat candidate Barack Obama. Kennedy, Carter, and Clinton also won after declines. 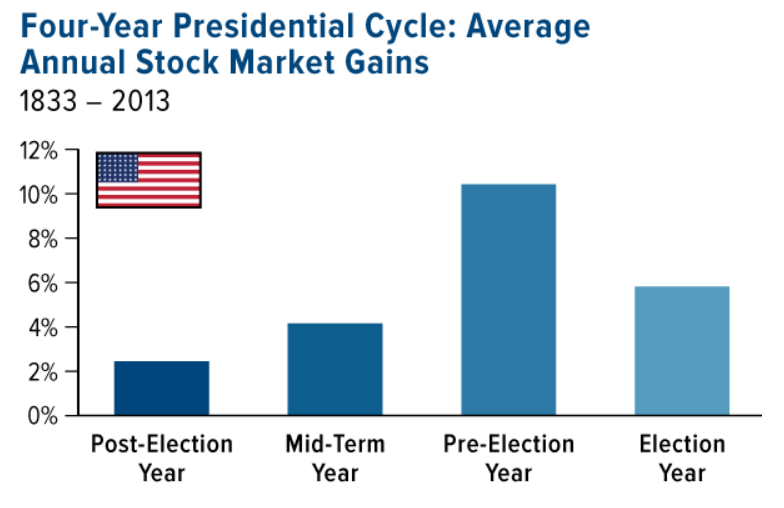 However, here is what is interesting and important - in the years of election of a new president, the S&P 500 index fell by 4% on average. The worst year in this sense was 2008, at the end of the presidency of George W. Bush when the market fell by almost 38%. Despite the fact that 2008 was an election year, there were a number of other forces that led to such a sharp drop in the stock market. In any case, in 2016 voters will have to elect a new president to succeed Barack Obama, who will complete his second term.

One of the reasons for the less successful results of the stock markets in the last year of the second presidential term is that the actions of presidents who face the limitation of their remaining time in office can be slightly unpredictable. Unpredictable behavior along with the lack of certainty about the next president's personality can cause significant uncertainty that can cause stock markets to fall.

Which party is most likely to be elected in an election year may also influence market results, especially as election day approaches. Usually, when people believe that a party in power will be elected, the market goes up. However, if a consensus indicates the election of a new party, the stock market tends to decline. Uncertainty and fear, unlike a sense of certainty and a sense of something familiar, can cause increased volatility.

To be more precise, if between July 31 and October 31 before the elections the market goes up, it means that people, in general, are inclined to the victory of the party in power. If the market falls, the overall sentiment indicates the victory of the new party. According to statistics, in 82% of cases of market growth in August and October, the party in power won. In 86% of cases when the markets fell as a result the new party won.

On the other hand, if in the year of presidential elections, Congress is led by Republicans, the S&P 500 index usually shows results much higher than the average with an increase of 19.7%, compared to the usual average growth of 7.6% in the years when Congress split, or 3.2% of Democrats are in charge in the election years. 2016 will mark the first election when an outgoing Democrat president had a Republican-controlled Congress.

How to Trade the Stock Market During Elections 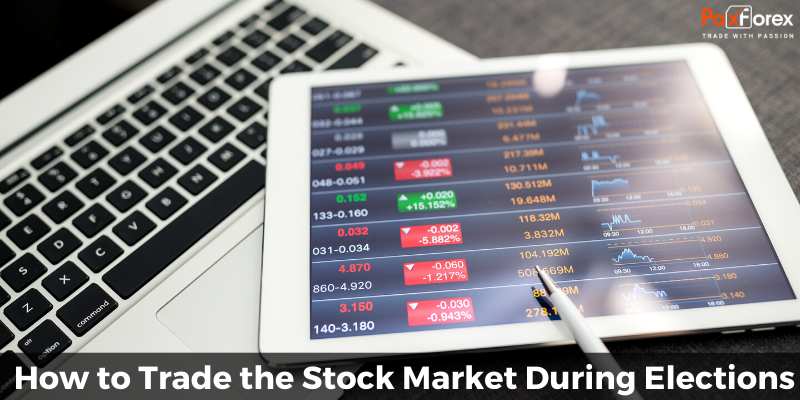 In order to take advantage of the stock market response to presidential elections, each trader should consider a lot of aspects. It won't make any sense to get obsessed with the election cycle and neglect the other factors that have a serious impact on the stock market. Any time trying to decide if this or that stock is a good investment opportunity, one should check thoroughly the current state of affairs in the company, recent news ( not forgetting to check even rumors), as well as analyze the technical picture as a whole.
Keeping in mind all the ways to analyze the stock market, investors can use it in trading in several ways:

One of the ways to take advantage of the stock market reaction to the elections is to monitor the trends within the first 2 years and spot the strongest sectors. For example, after Trump`s triumph 4 years ago, the banking sector showed an impressive rally - Bank of America stock was about $14 and then hit $34 in January this year. So, pay attention to the whole situation with some particular sectors and in case there is some improvement - wait for it to soar.

Rather than monitoring dozens of separate stocks and deciding which one to invest in, some traders prefer to pick to trade the overall stock market index like the Nasdaq-100. Investors can do that by investing in the stock market index ETFs. For example, the Invesco QQQ tracks the Nasdaq-100 and is dominated by big tech names like Apple, Amazon, Google, and Facebook.

Keeping in mind that during the first half of the election cycle market tends to sink, it will be a good idea for investors to look for the main "losers" in this situation and determine the most vulnerable sectors. The logic behind it is very clear - investors are likely to provoke a slump in some spheres withdrawing their funds and putting it somewhere else in case this or that sector does not manage to profit from the new policies. In such a situation the best thing a trader can do is to spot such sectors and to open a short position. Making use of CFD trading is the best way to make money when the market is going down.
In order to short a stock in the MetaTrader provided by PaxForex, go to the Market Watch and find the asset needed and press F9 on the keyboard. Or right-click the symbol you are about to trade and choose the New Order option from the menu appeared.

The majority of traders are likely to anticipate a trend to be confirmed and then trade following the direction of that trend. In case this newly established trend develops at the right time of historical data relied on the four-year cycle it may lead to a longer-term trend which may present short-term traders abundant occasions to make the most out of stock market response to presidential elections. Moreover, trading same direction is less riskier than trading against the main market direction.

Why Trade the Stock Market During Elections With Paxforex? 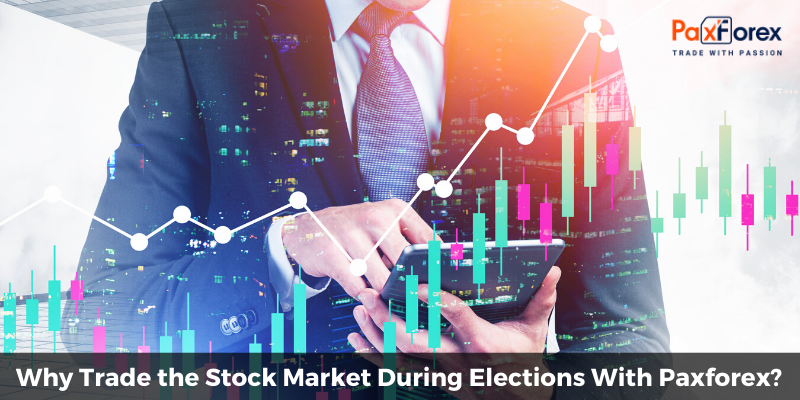 While trading the stock market response to election, every investor wants to make the trading experience as qualitative as it can be. So, here is PaxForex is the best broker for that:

The following information is meant to provide supplementary data concerning all analyses, assessments, predictions, forecasts, market studies, viewpoints, or other similar assessments or information (hereinafter "Analysis") published on the PaxForex website. Before making any investment decisions please pay close attention to the following: