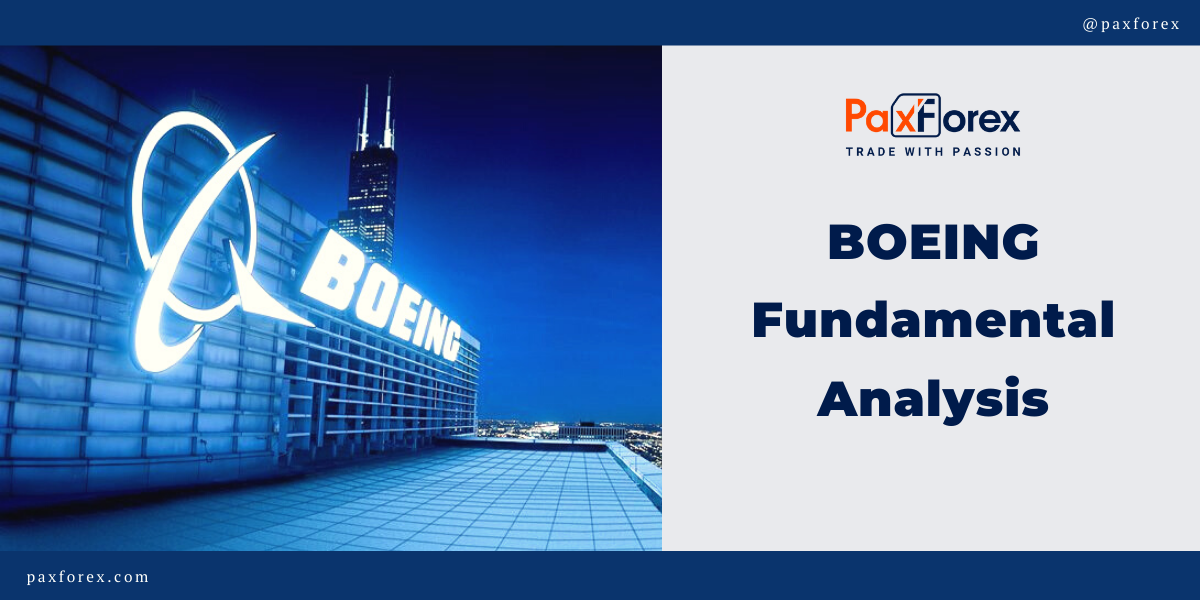 Boeing (BA) revenues have disappeared as the 737 MAX supply and production has been suspended while coronavirus is negatively affecting air travel. Investors should pay attention to the aerospace giant's fundamentals. The company reported how it plans to enter a survival mode with thousands of layoffs, deep cuts in aircraft production, billions of dollars of new liquidity, and cash-saving measures such as indefinite suspension of dividends and share buyback. According to analysts` Stock Checkup, Boeing's earnings per share have increased by an average of 0% over the past three years. Boeing incurred a loss per share of $1.70 in the first quarter compared to $3.16 per share a year ago. Revenue declined by an average of 6% over the past three years. In 1Q, revenue fell 26% to $16.91 billion as shipments of 737 Max stagnated. The commercial jet division's revenue fell 48% to $6.2bn as shipments fell 66% to 50 aircraft. Operating cash flow in the first quarter was negative $4.3 billion. Cash and cash equivalents rose to $15.5 billion from $10 billion in the fourth quarter, while debt increased to $38.9 billion from $27.3 billion. Boeing's defense and space business has also faced negative news. The KC-46 tanker for the U.S. Air Force is more than two years behind schedule, costing Boeing $4.6 billion for overspending after pre-tax expenses of $827 million in the first quarter. Boeing also produces F/A-18 Super Hornet for the United States Navy and foreign military forces. The Air Force budget for 2020 includes eight upgraded Boeing F-15eX fighters, and budget requests for the fiscal year 2021 include 12 orders. The space business of the company also failed on December 20, when the capsule of the "Starliner" failed to reach the necessary orbit for docking with the ship.

International Space Station. The company has also charged a pretax Q4 fee of $410 million related to the Starliner capsule and announced that it will conduct a crew free retest in April. In

February, NASA discovered that during the Starliner flight, an undisclosed software problem that could destroy the space capsule was discovered. The report of the NASA inspector general also noted continued delays in the launch of the Boeing space launch system. Boeing also confirmed earlier reports that it had secured a $13.8 billion loan to increase liquidity and ease some of its significant short-term business pressures. To help save cash, on March 20 Boeing suspended dividend payments and extended the buyback pause until further notice. Dave Calhoun, CEO, and Larry Kellner, Chairman of the Board, will also withhold the dividend payments for the rest of the year. In April, when airlines reduced the number of flights, Boeing showed that production of 787 aircraft will slow down from 14 per month to 10 in 2020, and 7 aircraft to 2022. The total production of 777/777X will be reduced to three per month in 2021. Boeing expects the number of employees to decrease by 10 percent this year, which means a reduction of 16,000 jobs, including 15 percent in the commercial segment.

Production of the Boeing 737 Max was shut down in January. Boeing said production of the 737 Max will resume at a slow pace in the second quarter. But the planned production growth has slowed and will gradually increase to 31 per month in 2021. The aerospace giant was set to increase the production of 737 Max to 57 aircraft per month last year. But CFO Greg Smith told analysts on February 12 that several years will pass before Boeing reaches this goal.

Bans on flights, suspension of deliveries, and production stoppages were costly. In January, Boeing announced additional costs of $9.2 billion for potential concessions to 737 Max customers, production costs for 737 aircraft, and $4 billion for "abnormal production costs. In April, Boeing announced an additional cost of $1 billion. Together with the costs booked last year, the costs associated with the 737 Max currently exceed $19 billion.

The Securities and Exchange Commission is reportedly investigating the financial disclosure of the aerospace giant in connection with the grounding of the jet. Congress, the Department of Justice, the FBI, and the Office of the Inspector General of the Department of Transport are also trying to find out if the giant Dow Jones has provided misleading information about the Boeing 737 Max to regulators and customers. Based on the MCAS probes, the Department of Justice has received a new request focusing on quality control issues at Boeing factories, sources at the Wall Street Journal said in April.

The Boeing 737 Max is still on the ground, and U.S. airlines have removed the aircraft from their schedules until fall. The Coronavirus is hitting global air traffic, suppressing already weakened demand for wide-body 787s.

After an epic free-fall, BA stocks bounced back a little and are well below their 50-day and 200-day lines. For most of the year, the stock fell behind the S&P 500.
In early March, stocks fell to their lowest levels in seven years and Boeing's upper bound is still below companies like Tesla (TSLA). Boeing shares are also not in any of the purchase zones and do not form a visible picture.