What Is A Pip In Forex Trading: A Complete 2020 Guide 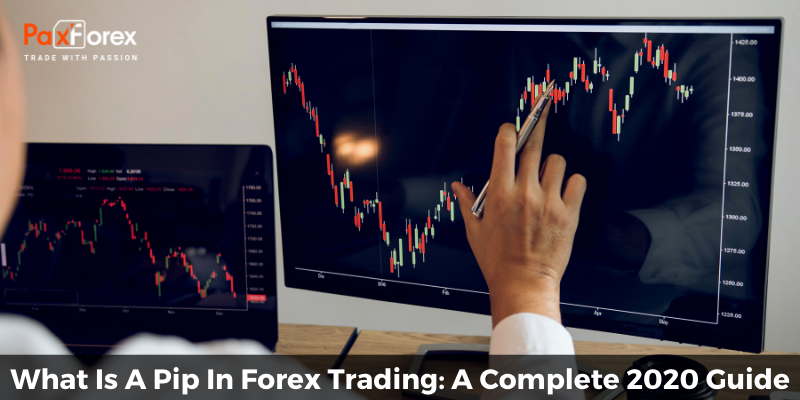 There are hundreds of Forex related terms and concepts. Some of them are only relevant to specific trader groups, while others are absolutely necessary for everyone. Today’s discussion is focused on the second category of crucial information. In this post you will learn what are pips in Forex, how to calculate their value and how to use this knowledge in trading.

What Are Pips In Forex

You’ll see and hear the word “pip” mentioned pretty much anywhere there’s Forex talk. So, it makes total sense to take some time defining what is Forex pips. Although pip is believed to be an abbreviation for either Percentage In Point or Price Interest Point, this might not exactly be true for the term's origin.

But we don’t really need to know the etymology to use the pip in Forex trading. It’s enough to simply know what it is. Pip is a measure unit for price quotations in the currency market. Traditionally, it is the last decimal place in the standard quote with four numbers after the dot. Until very recently, pip was considered the smallest measuring component at most markets.

Pretty straightforward so far, right? Well, no one said it will be hard. So, why do we need to devote an entire post to such a little factor? The answer is simple: this little brick in the foundation of currency trading knowledge kind of holds the whole structure together. As long as you understand what is Forex pips, you will be comfortable both learning and trading.

Many professional traders don’t waste much time on explanations. They will much rather use shortcuts and slang to describe what has happened or what they are planning to do. A good example of this tendency to simplify, is referring to the pair of the British Pound with the American Dollar as the “cable”. This way instead of saying: “The GBP has risen against the USD by 0.0022”, experts will say: “The cable has risen 22 pips”.

Now, although the traditional price quote contains four spaces after the dot, there are exceptions as well as specifications to this rule. Next, we will discuss the pip Forex irregularities and more precise measuring points.

While most price quotations will have four decimal points, some might stop at as much as two. This is explained by tremendous value differences. The most noteworthy example of such anomaly is any pair involving the Japanese Yen.

By this logic we can picture that the USD/EUR quote will look like 0.8913, and the USD/JPY will be expressed as 107.19. You can clearly see the value difference in this example: for one dollar we can get just about ninety Euro cents or over a hundred Japanese Yens. In pairs where there are just two numbers after the dot, the pip amount is indicated by the second number.

As previously mentioned, pip Forex is no longer the smallest measuring unit in currency values. With the growth of technology and popularity of online trading, the quotes now also include a fifth and third decimal places (respectfully to the pairs with four and two).

However, the meaning of what is Forex pip remains the same: for four decimal place quotes it is the fourth number and for two place ones — the second. This means that there has got to be another term to define the fifth and third numbers.

Those little guys have several names, such as pipettes or point, with their official term being “fractional pips”. Fractional pips are used to evaluate micro changes in the currency pairs and place miniature trades, very common in methods such as scalping.

Just before we go into the specifics of calculating values of pips in Forex trading, here is a helpful breakdown of what each number in the quote means.

Now that we know what is a pip in Forex trading and what it can look like, let’s learn to calculate the value of a pip.

How To Calculate The Value Of One Pip In Forex Trading 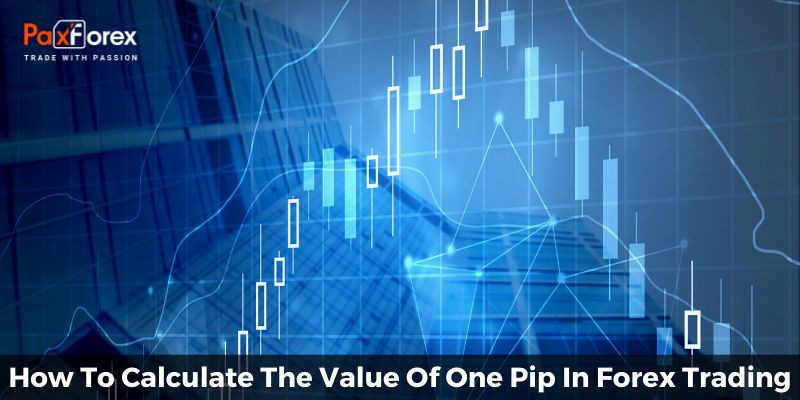 You might ask: do I really need to know how to calculate the value of every pip in Forex trading? No, not really. Most brokers will show the pip value for your account’s currency automatically. However, by getting to know the math behind these numbers you can get a more hands-on feel of your potential losses and gains, which can be helpful in risk management and trade strategizing.

The most important thing to remember about what is Forex pip value, is that it will be different for each currency pair. Once again, you don’t exactly have to do the math each time you trade, these examples are given mostly for the purpose of having a clear idea of how the market operates.

Let’s look at pip value calculation in both four decimal places and two decimal places quotes. We are going to use the pairs from the previous example: USD/EUR and USD/JPY.

Note that in both examples we use the term “approximate value”, because the rate is constantly fluctuating and with it the single pip value changes as well. This doesn’t mean you need to recalculate all the time, the pip value will be automatically displayed by your trading terminal, however, you still need to understand the math in order to become a true pro.

Next, let’s use the knowledge we have so far to see how pip value can affect the outcome of each single trade. More specifically: what is pips in Forex significance when it comes to decision-making.

For simplification purposes, many traders will refer to the one pip change as 10 units of the base currency. However, as we saw from the examples above, those values are only approximately around 10. Which means that if you want to calculate precise potential profits and losses, make sure the math behind your pip values is also precise.

Let’s take the pairs from the previous example of what is pips in Forex trading calculation looks like and apply a possible market scenario. This will help you see how much a simple measuring point can mean in the trading process.

From here you have probably figured that counting pips is an effective way to estimate profits or losses. By setting the specific targets you can make sure that you don’t get too involved in an ongoing trend or don’t get sent too far backwards. Which brings us to the next segment of this post: pips in Forex trading strategies. 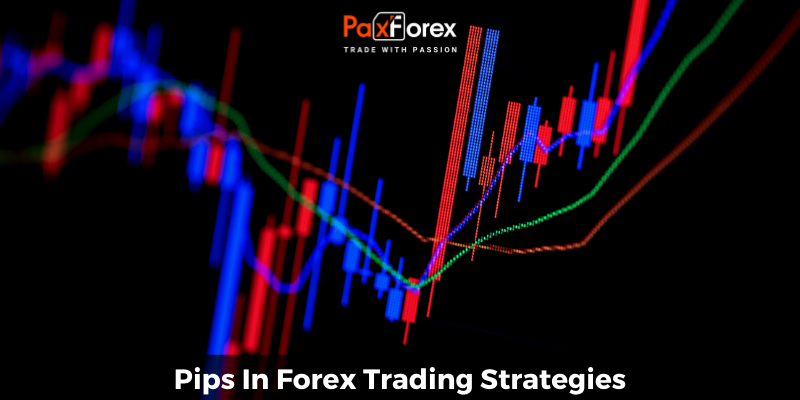 When traders skip the initial steps of learning about currency trading, they might later have to circle back to what is pips in Forex when they come across pip-based strategies. Trading strategies are extremely helpful for both inexperienced traders and professionals. A strategy will establish what are the perfect conditions to open a position, how long it should last and when is it best to end it.

Now, because pips are so easy to monitor, the trading community came up with a whole category of strategies that revolve around gaining a set number of pips. The pip amounts in these approaches vary from 10 to a 100, and might be stretched over different periods of time. The main objective of such strategies is to gain the profit equal to a specified amount of pips over the chosen time period.

After you observe the charts for a while, you’ll notice that it is more than possible for some pairs to fluctuate 10 pips an hour, while for others it is rather challenging to move over 10 pips during an entire day. Which makes the instrument selection the most important step of any pip related strategy.

We already know in Forex trading what is a pip, and we also know that the currency pairs that move faster and more aggressively than others are those that get the most attention. In other words: the most liquid pairs, such as USD/EUR or GBP/JPY are more likely to become assets in strategies like 50 pips a day.

Another way to implement pip counting in your trading is risk management. From the USD/JPY example above we saw how 6 pips came down to costing $55 worth of losses. While trading with $100,000, just over fifty bucks is not too big of a deal. However, in the scenario where the price would grow more drastically, such as 16 or 20 pips, the setback would become more and more noticeable.

That’s why as you calculate your potential profits, it is important to calculate risks you are taking as well. If you are aiming to gain 10 pips, you might decide not to go further down than 5 pips, for example. In order to make sure the price won’t hurt you too much, you will set a stop loss order, which will be automatically executed as the price passes the specified pip amount. Now, let’s look at the technical side of doing this.

After you learn what are pips in Forex, you might get slightly confused when you get to the order window in Metatrader 4, because pips are not mentioned anywhere. Under the “Modify order” option you can choose the points where you want to locate your stop loss and your take profit. Take profit is also an automated order that works by closing the trade, once the aimed for level has been reached.

These levels are basically price values that will draw a line through the specific point at the chart. You will see that levels are calculated in points, rather than pips. And that’s where our understanding of pipettes comes in handy.

A point in MT4 is simple one-tenth of a pip, meaning that by choosing 20 points you will set the level 2 pips away from the original rate. Metatrader 4 is going to automatically display the rate at this distance as well as outline the level on the chart. This will help you visualize your pending orders better and keep calm throughout the trading process.

Today we’ve deeply explored what is a pip in Forex trading and how they can be helpful in strategizing and planning. As mentioned before, pips are quite literally tiny, however, they make up a big portion of what currency trading actually is. Because it’s the mere fluctuations in last decimal points that make up large gains and bitter losses.

Practice noticing the minor changes in prices by watching live charts and experiment with different pip-based strategies. Keep in mind that just like any other aspect of trading, pips can be successfully combined with other techniques and tricks. For instance, you can be basing your strategy on a candlestick pattern formation, but still establish stop losses and take profits in pips, rather than according to other elements of the chart.

Keep exploring the depths of Forex trading and don’t hesitate to keep your journey as simple as 10 pips a day. Because you are the one who defines your own goals, expectations and abilities.