It is time for the third and final part of my 2020 predictions series. During the first part, I covered Gold, Silver, and the EURUSD. You can get my predictions at “2020 Predictions Part One”. Yesterday, I outlined my outlook for the USDPLN, the EURHUF, and JPM. My predictions for those three assets can be read at “2020 Predictions Part Two”. Today, I will complete this series by taking a look at Boeing, IBM, and Ethereum. 2020 has started with a lot of turbulence and a large amount of hope priced-in across the financial system.

Boeing had a rough 2019, which is reflected in its share price. After reaching an intra-day high of $444.96 in March, a series of deadly crashes revealed wider issues with its 737 Max related to software issues. Those issues were denied until two planes crashed, and a wider investigation uncovered bigger security concerns outside of software. In October, it was announced that older versions of the 737 series were impacted by the problems. The fleet remains grounded after to-date. 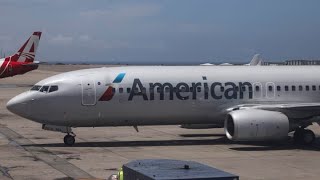 The problems could have been fixed, but management ignored them until two plane crashes cost the lives of 346 people. As of November 2019, Boeing lost over $10 billion in lost revenues, compensation, and lawsuits. Last month the company forced the resignation of its CEO. Over 400 planes await delivery, and production is temporarily halted until the fleet is cleared operational. While I expected Boeing to have another tough year due to lost confidence, it remains one of only two companies that are competitively producing passenger jets. Therefore, a crash in its share price may create a great long-term buying opportunity.

Big Blue is the nickname for IBM, an iconic multi-national powerhouse that has been under pressure for years. Despite all the great accomplishments, it's twelve research labs have accumulated, IBM’s share price has faced a downtrend since 2013. It appears as this company lost its identity, management requires an overhaul, and a clear path should be communicated. One attempt was made in October of 2018 with the acquisition of RedHat, but revenues have been contracting constantly since 2012, and the workforce continues to shrink in an attempt to produce quarterly numbers that will please investors. 2020 shapes up to keep the long-term downtrend intact.

Ethereum to Drop Below $100

I have been bearish on Ethereum since the start of 2019, and I think die-hard supporters of this cryptocurrency should be prepared for a drop in ETHUSD below $100. Miners are continuously forced to shut-off as it has been unprofitable for most smaller operators below $150. Two hard forks in thirty days have delayed the dreaded difficulty bomb by another 4,000,000 blocks, in a desperate attempt by the remaining developers to buy time and resolve issues.

Now Ethereum asks those who believe in the project to wait until at least 2021 before there could be hope for a better future. Many developers are leaving for alternatives, with TRON, Binance, and Tezos attracting plenty of talent. It seems that whatever Ethereum plans to do moving forward, is being done by another project a lot better, with a brighter outlook and greater potential for everyone involved. 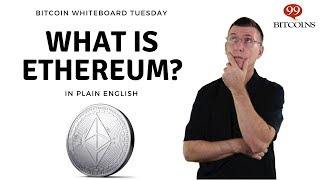 What is Ethereum? A Beginner's Explanation in Plain English 11:50

A drop below$100 will deal a major psychological blow to Ethereum, and I won't be surprised if it loses its number two spot to Ripple in 2020 before retreating out of the Top5 cryptocurrencies. All that needs to happen is for Ripple to remains stuck around $0.2000, which I doubt will be the case, and for ETHUSD to drop to around $70, where I think price action is headed next. Bitcoin Cash and Litecoin offer better value as compared to Ethereum, and we are not even talking about great moves here. Then there are dozens of smaller projects many ignore right now. 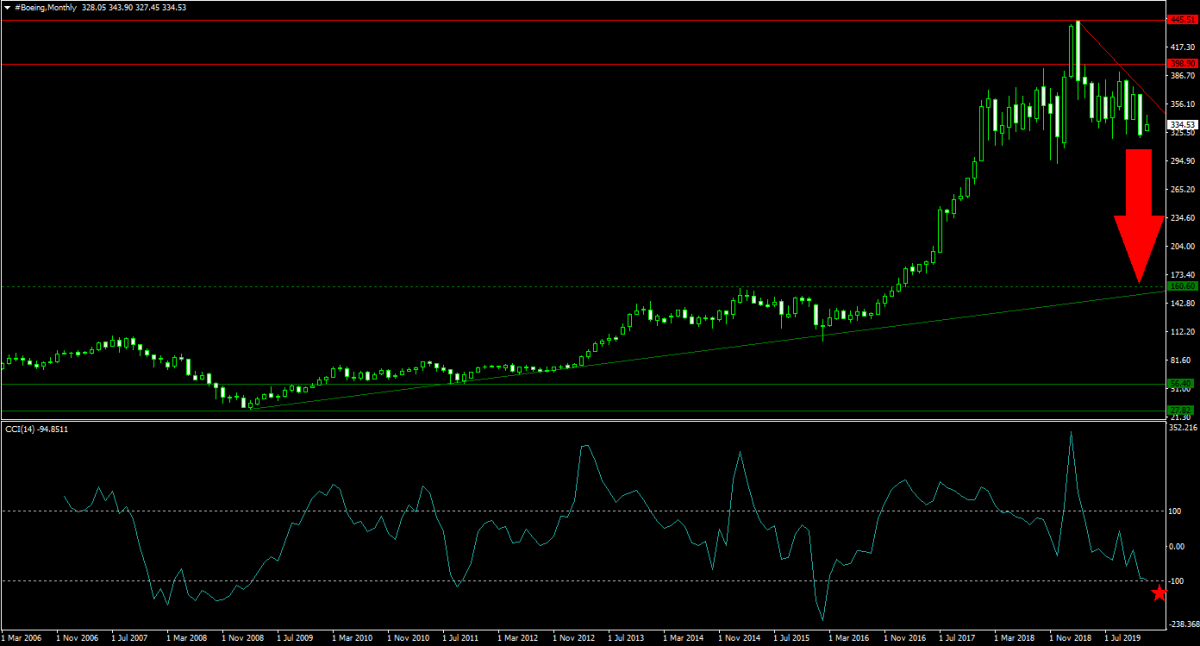 It takes a bigger look at the Boeing chart to see that since 2014, the share price accelerated without a proper correction. This has made a much bigger sell-off likely, and following the breakdown below its horizontal resistance area, its primary descending resistance level is adding bearish pressures. A breakdown below its 2018 intra-day low of $292.11 may set-off a selling spree down to the $160 level, where its primary ascending support level is located. The CCI is approaching extreme oversold conditions, with plenty of downside potential. Open your PaxForex Trading Account today, and join one of the fastest-growing communities in the forex market! 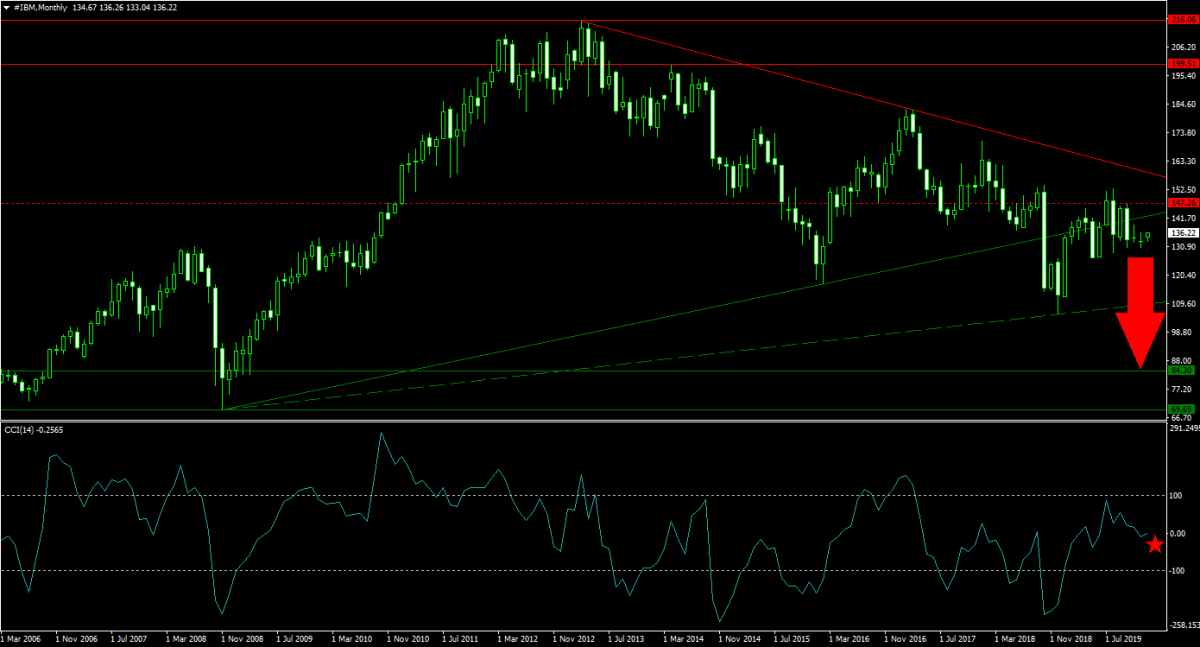 There is nothing in the IBM pipeline that suggests the long-term downtrend, in place for almost six years, will end in 2020. Price action dropped below its primary ascending support level and may attempt to challenge it, before resuming its slow-bleeding descend. A breakdown below its secondary ascending support level will clear the path into its horizontal support area. The CCI completed a bearish momentum crossover, and more downside is expected. Subscribe to the PaxForex Daily Fundamental Analysis and earn over 5,000 pips per month. 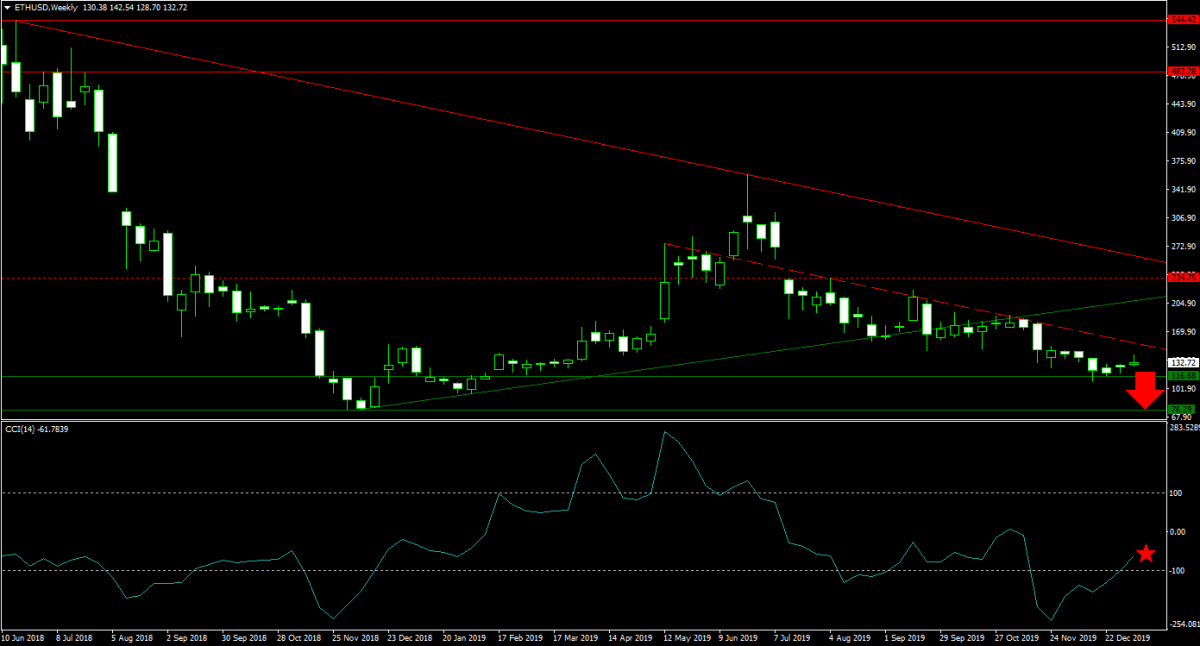 During July 2019, a downside gap initiated the next phase of the slow collapse in price action. Since then, ETHUSD broker down below its primary ascending support level, adding to the accolades of a bearish trend. This cryptocurrency pair is now likely to be pressured into its horizontal support area by its secondary descending resistance level, taking it to around the $70 level. The CCI moved out of extreme oversold conditions, just in time for a new breakdown. Follow the PaxForex Daily Forex Technical Analysis and grow your balance trade-by-trade!