The past five years have been tough for dividend-oriented investors. In an era of widespread technological disruption, the market has favored stocks that mostly do not pay dividends.

But the banking sector is one area where investors can find reliable, growing dividends at reasonable prices today. The winners of last year's tech growth sold shares for fear of rising interest rates, but most of the big banks are benefiting from rising rates, which can increase their net interest margins. So banks today could be a great safe-haven asset for risk-averse investors and retirees. Among banks, possibly none is better fitted to this risk group than Bank of America.

Warren Buffett sold a lot of bank stocks last year but added to his stake in Bank of America. Buffett's conglomerate, Berkshire Hathaway, owns just over 1 billion shares, good for 11.4 percent of his company's portfolio, and the second-largest publicly traded stock overall.

Why does Buffett like Bank of America so much? Probably because of its conservative underwriting philosophy led by CEO Brian Moynihan, spectacularly dubbed "Responsible Growth."

Since Moynihan took the position in 2010, Bank of America has largely stuck to simple lending while evading risks and exotic products like those that recently caused several banks problems with hedge fund Archegos Capital Management. In the wake of the global financial crisis, the reimagined strategy of "responsible growth" has four pillars:

We must grow in the marketplace, with no excuses.

We must grow with a customer focus.

We must grow within our risks.

We must grow sustainably.

The risk framework should be conservative, designed for the long term, and focused on the bigger picture. As we implement this strategy, the bank's net income has become more stable and consistent.

Even in a pandemic year when some banks had negative earnings and some even had to momentarily cut their dividends, Bank of America managed to earn $17.9 billion in net income and maintain its payout, which now stands at 1.82%. Due to conservative underwriting, net distributions increased only insignificantly, from $3.6 billion in 2019 to $4.1 billion in 2020. Being greatly capitalized, Bank of America has been given the green light for the Federal Reserve to resume its buyback program.

While some think that conventional banks are threatened by stellar newcomers in digital financial technology, the largest and best-run banks still have a competitive advantage. These include large nationwide networks of bank branches that allow for lower-cost deposits, as well as financials that allow for significant investments in technology.

Over the past six years, BofA has invested $18 billion in technology, with 300 new branches opened and 2,000 more renovated. That investment in technology has further reduced costs; operating expenses fell from $57 billion in 2015 to $55 billion last year, despite the $1.5 billion in additional costs associated with COVID-19. And that's despite the company's decision to raise the minimum hourly rate to $20 during that time.

Bank of America is trading at about 15.8 times the other major banks this year, but still well below the market as a whole. Since the financial crisis, banks tend to have lower P/E ratios amid low economic growth, low interest rates, and post-financial regulation.

Nevertheless, Bank of America and other large banks have made steady profits and high returns on equity during this time, returning cash to shareholders in the form of dividends and share repurchases. In effect, the big banks have become more like reliable, low-growth utilities.

However, it was capital regulation that allowed the banking sector to survive the COVID-19 recession comparatively well. Meantime, given the unprecedented amount of fiscal and monetary stimulus now flowing into the economy, and perhaps even more with the new infrastructure bill, the dual obstacles to economic growth and low long-term interest rates could be reversed. If interest rates rise, Bank of America is likely to face an increase in net interest income given its highly creditworthy business model.

Large banks were generally safe in the COVID crisis and could benefit from higher economic growth in the aftermath of the pandemic. If you want to invest in financial reflation trading, Bank of America may be the best choice for low-risk investors.

However, while younger investors tend to invest in brighter, growth-oriented companies, they could also benefit from the fact that Bank of America maintains its position, increases its dividend, and can thrive in a higher yield environment.

In short, BofA is a solid choice for all types of long-term dividend-oriented investors. 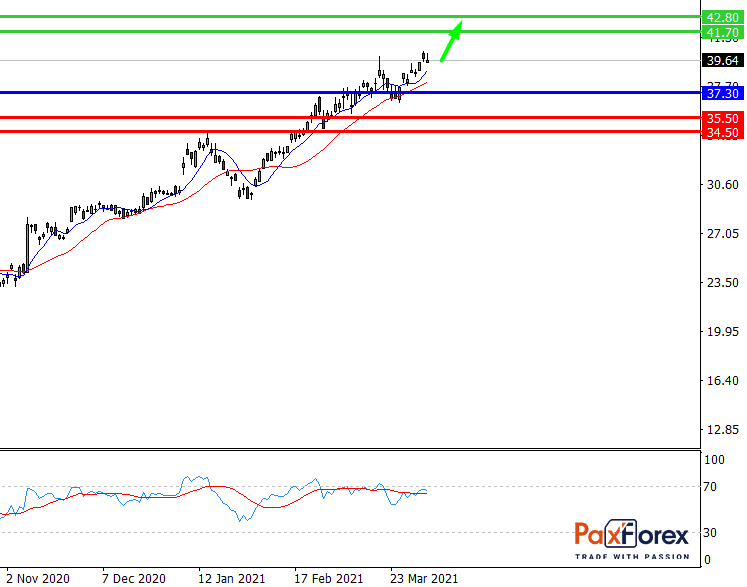 While the price is above 37.30, follow the recommendations below:

If the level 37.30 is broken-down, follow the recommendations below: