With the clock ticking down to October 31st 2019, the date UK Prime Minister Boris Johnson promised to take the UK out of the EU, deal or no-deal, he made his first public attempt to get the EU back to the negotiating table. The biggest issue which has prevented progress remains the Irish border, the only land border the UK will share with the EU. The land border would run between the Republic of Ireland, part of the EU, and North Ireland which is part of the UK. The EU insists on a backstop, negotiated and agreed on by former UK PM May and rejected three times by Parliament, which would essentially tie the UK to the EU customs regime and prevent it to strike trade deals of its own.

The EU has refused to discuss alternative ways of ensuring no land border. PM Johnson send a letter to outgoing European Council President Tusk where he suggested that the Irish backstop clause will be replaced by a legally binding commitment not to built infrastructure around the border and not to impose checks. The aim is to create an invisible border aided by technology. Johnson stated that the UK is willing to accept and enforce such a commitment if the EU is willing to do the same. He pointed out that both sides need “to put in place such arrangements as far as possible before the end of the transition period.” A transition period will only apply if the UK leaves the EU with a deal.

Johnson is prepared to negotiate an alternative solution to the Irish backstop, but made it clear that in order to strike a deal the EU must be willing to drop its current stance. Until now, the EU refused to negotiate the Irish backstop and insisted it must remain in place. Johnson acknowledged that there “will need to be a degree of confidence” if the situation won’t be resolved by the time the transition period is over. There is still room to find a solution in order to strike a deal and after Johnson opened the door to negotiate, the balls is now back in the EU’s court. 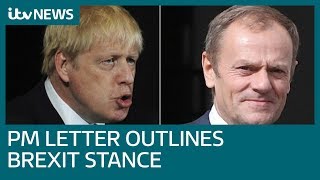 Boris Johnson says Irish backstop must be dropped if UK is to leave EU with a deal | ITV News 2:50

The letter was send to the EU a few hours after the UK stated that without a deal, freedom of movement between the UK and the EU will end on day one. It further added that freedom between the UK and Ireland will remain in place. PM Johnson mentioned in his letter that “Time is very short. But the UK is ready to move quickly, and given the degree of common ground already, I hope that the EU will be ready to do likewise.” How will the EU react and what impact will a positive response have on the British Pound? Subscribe to the PaxForex Daily Fundamental Analysis where you increase your balance trade-by-trade.

As Johnson stressed that he would prefer to strike a deal with the EU, he made sure that the EU is aware that the UK is fully prepared for any “bumps in the road’ of a no-deal Brexit. He faces mounting pressure to cut the summer recess of Parliament short in order to give MP’s a chance to address Brexit. Keir Starmer, the Labour Party Brexit Spokesman, criticized Johnson’s letter to the EU and tweeted “He suggests (unspecified) alternatives to the backstop. And if they don’t work: further (unspecified) alternatives to the backstop. Why didn’t anyone think of that before!” As Johnson admits that there will be issues from a no-deal Brexit, he instructed his Brexit government to launch a publicity blitz in order to prepare the public for such an event. Under the May government, information campaigns were directed at businesses and how to prepare, the Johnson government aims to talk directly to citizens in a more user-friendly approach.

Navigating through Brexit can be a challenge for many forex trader, but it doesn’t have to be! At PaxForex we take care of every trader, join us now and find out how.

No Deal Brexit Concerns Are Exaggerated

According to a report in the Sunday Times, “Operation Yellowhammer”, the codeword of the UK governments no-deal Brexit plan, pointed out a three-month meltdown at UK ports with food, medicine and fuel shortages. Michael Gove, the Chancellor of the Duchy of Lancaster and in charge of no-deal Brexit preparations, addressed the report as out-dated and exaggerated. He further added that the report painted a worst case scenario and how the UK government would handle such an unlikely event. He suggested that the Johnson government is prepared for any outcome and “worst-case” planning is a requirement for that.

Brexiteers cite the success of Switzerland, much smaller in size and scope than the world’s fifth largest economy, as a reason to stay the course of Johnson’s tough stance. Switzerland is in a stand-off with the EU in regards to equity trading and demanded that all trades will take place in Zurich. Trading was smooth, panic exaggerated and trading volumes jumped 33%. Brexit Party Member in the European Parliament Ben Habib added “It’s obviously very encouraging for those of us who believe in Brexit and those of us who believe that our government has been timid in its dealings with the European Union.” His colleague Jake Pugh noted that “One can only conclude that the EU may no longer be seen as an organization respecting the rules-based order.” 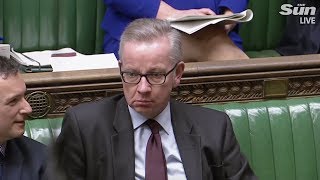 Gove and Corbyn swap insults as Brexit clock ticks on 1:45

Opposition Leader Corbyn didn’t waste any time to attack the outdated, leaked report and the prime minister. He stated that “If the government wants to be believed that it doesn’t represent the real impact, it must publish its most recent assessments today in full. Boris Johnson’s denials can’t be trusted, and will do nothing to give businesses or consumers any confidence that the dire state of affairs described in these documents aren’t right around the corner.” Corby and his Labour party seek to prevent a no-deal Brexit at any cost which could include a no confidence vote, an early election or a second referendum on Brexit.

After an extended sell-off, the GBPCAD started to stabilize inside of its horizontal support area. Bullish momentum is on the rise, increased by its primary as well as secondary ascending support levels. Price action has additionally moved above its primary and secondary descending resistance levels and turned them into support. This currency pair is now in the process to attempt a breakout above its horizontal support area from where the path is clear for an extended advance. Buying any potential dips in the GBPACD from current levels remains the favored trading recommendation. 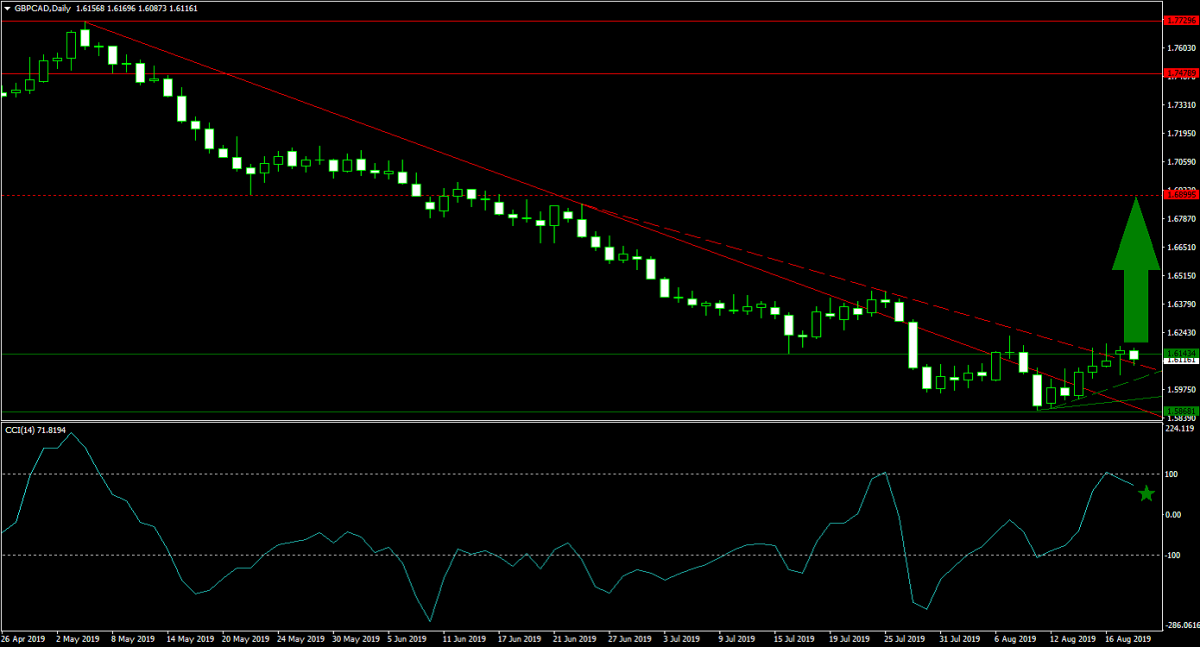 The CCI briefly spiked into extreme overbought conditions, but has since retreated while remaining in bullish territory. This technical indicator is now expected to rise to a new 2019 high. Open your PaxForex Trading Account now and join one of the fastest growing trading communities in the forex market! 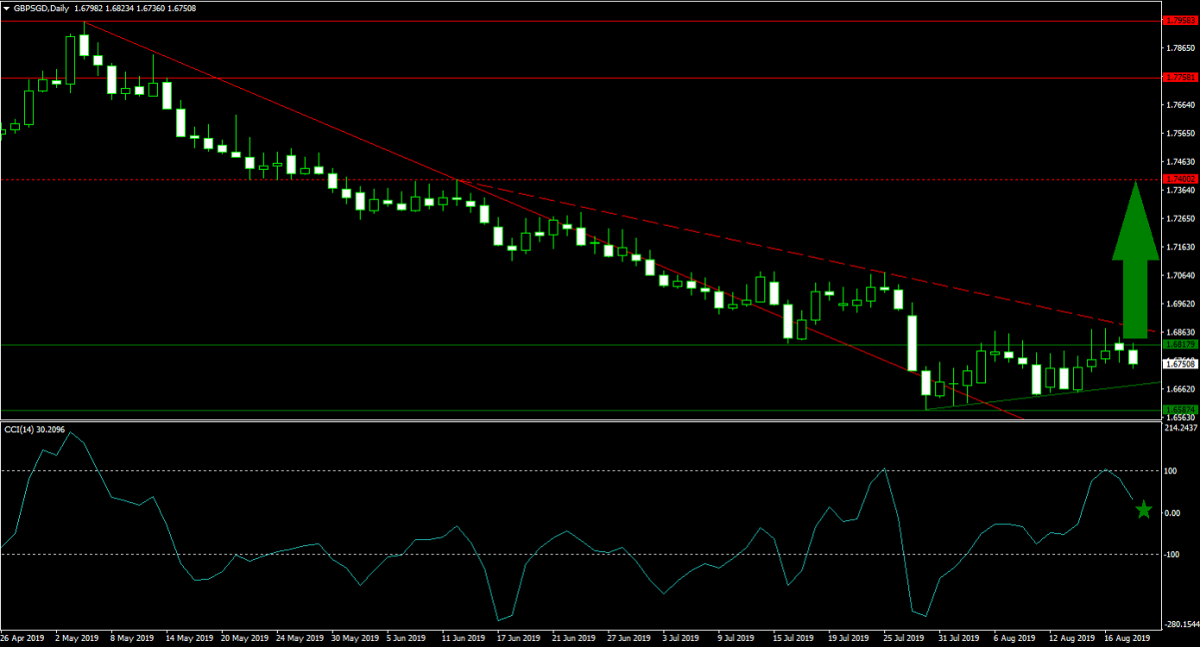 The CCI is trading in bullish conditions above the 0 level after retreating from a brief advance into extreme overbought territory. This momentum indicator is now favored to retrace its corrective move. Subscribe to the PaxForex Daily Fundamental Analysis and allow our expert analysts to guide you to over 5,000 pips in monthly profits!

Forex traders looking for a short trading opportunity in the British Pound can take advantage of a pending short-term price action reversal in the GBPZAR. Price action lost bullish momentum as it approached its horizontal resistance area and its primary descending resistance level is further adding downside pressure. This currency pair is now expected to descend until it can reach its next horizontal support level. Forex traders are recommended to sell any rallies in the GBPZAR into the upper band of its horizontal resistance area. 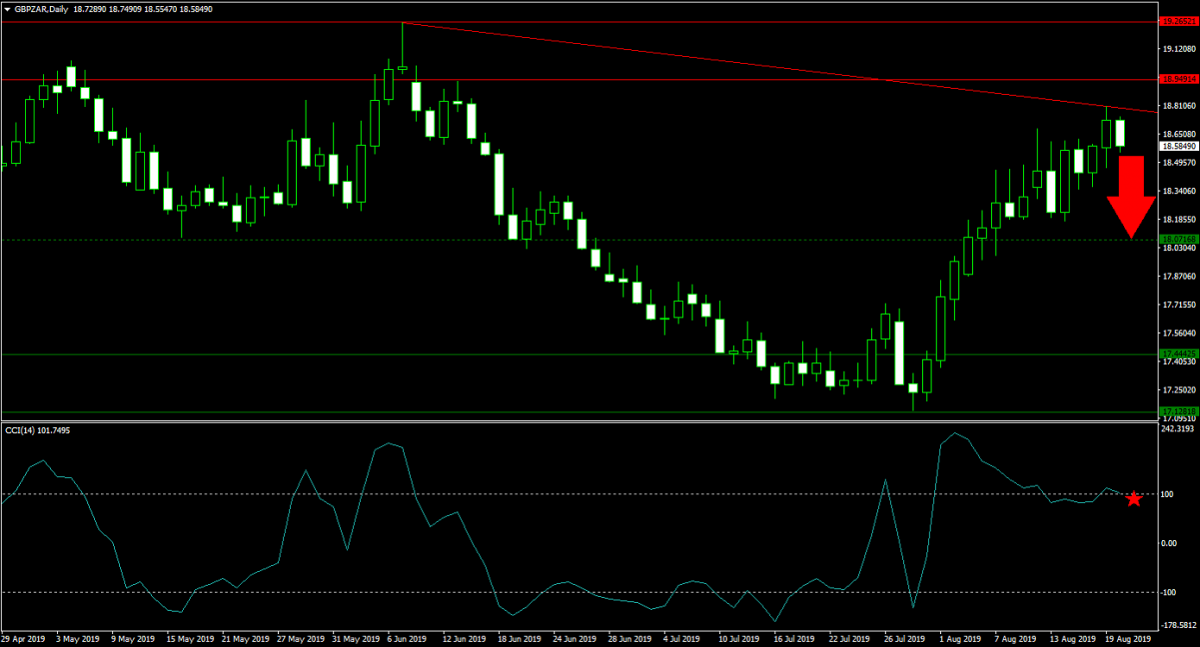 The CCI is trading in extreme overbought territory, but well off of its highs. A breakdown below 100 is anticipated to lead to the next wave of sell orders in this currency pair. Follow the PaxForex Daily Forex Technical Analysis and simply copy the recommended trades of our expert analysts into your own trading account!