How to Use RSI and MACD Together 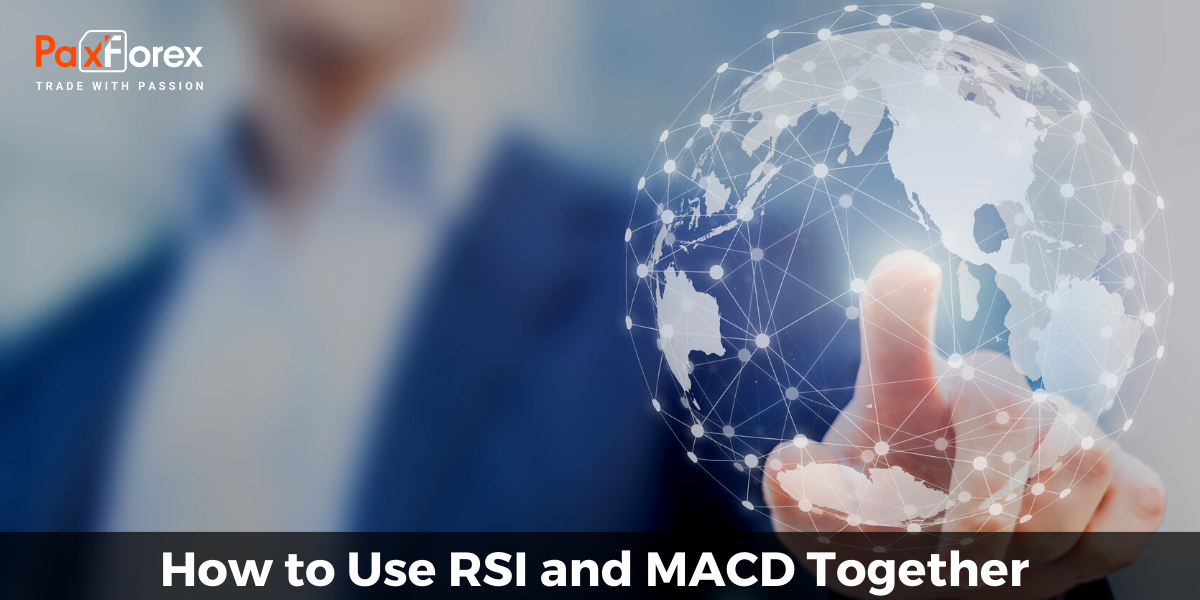 Both RSI and MACD are highly effective momentum indicators. In order to use them correctly you need to start by learning how each of them works. Today we will discuss how to read MACD and RSI as well as the possibility of using RSI and MACD together.

What Are RSI and MACD

Forex technical indicators are assistance tools designed to extract and analyze certain information from the chart. Based on each indicator’s calculations, a trader can form an opinion on the current situation at the market as well as to plan the upcoming trades.

Technical indicators can be divided into four categories: trend, momentum, volume and volatility. As we can guess from the category names, every group has its own measuring tasks and all of them are equally important in technical analysis of the Forex market.

We have previously mentioned that both RSI and MACD fall into the segment of momentum indicators. However, while they have been designed to measure the same factor, trading with MACD and RSI combined is a very popular approach. This can be explained with the fact that both these indicators calculate different values.

Before we go into the understanding RSI and MACD differences, let’s first break down each of these indicators.

RSI is short for Relative Strength Index and its main task is to compare market data in order to indicate whether the market is overbought or oversold. RSI works by calculating average gains and losses over a chosen time period (default period is 14).

The Relative Strength Index indicator is located at the bottom of the chart and represents a zero to a hundred scale with two lines drawn at the levels of 30 and 70. When the indicator graph crosses 70, the market is most likely overbought and when it crosses 30 — oversold. The scale is also virtually divided in the middle, everything above it can be roughly considered bullish and under it, bearish.

MACD is an abbreviation for Moving Average Convergence Divergence. This momentum indicator measures strength and speed of price movement. The interactions of MACD’s elements with each other can serve as entry points, trend confirmations and signal filters.
The MACD indicator includes two lines, blue and red. Blue line is MACD itself and it is calculated by subtracting a 26 period Exponential MA from a 12 period one. A red line is an EMA with a 9 period. The difference between two lines is translated into a histogram which can be used to predict crossovers of lines. And a medium zero line helps to differentiate the negative indications from positive ones.

Now that we know the principles of how to read MACD and RSI, it is time to outline the exact difference between the two.

Difference Between RSI and MACD

The main reason behind RSI and MACD indicators combination being popular is that they can sometimes contradict each other. That’s why it makes sense to re-confirm the data provided by one indicator with another.

While MACD measures the connection between two Exponential Moving Averages, RSI compares price changes to the most recent lows and highs. This way they look at the same aspect, the momentum, differently.

Understanding RSI and MACD differences is crucial for combining them within one trading strategy. Next, let’s go over one of the examples of getting the best out of these two indicators.

MACD and RSI trading strategies are for the most part very straightforward. This indicator combination is very often used by short term traders, such as scalpers or day traders. The reason behind such popularity is simple: together RSI and MACD provide a virtually foolproof set of signals.

The most common way of how to use RSI and MACD for day trading is to pull out two charts: one with daily time frame and one with hourly. On a daily chart, apply the MACD indicator, without adjusting any parameters. This action is going to help you determine the overall trend.

On the hourly chart apply the RSI to help you identify the trading signals. For example, if the daily chart confirmed that the overall trend is upward and RSI breaks the 30 limit from below, a trader can confidently open a long position.

Short positions in MACD and RSI trading strategies are opened using the opposite logic. When the daily chart’s MACD indicates a downward trend, and on a daily chart the RSI breaks the 70 limit from above it is time to go short. Stop losses are usually located at either the previous extreme or at the edge of the signal candle, depending on your trading style.

Now, that you understand using RSI and MACD together, go ahead and give them a try during your next session. Start by observing and getting familiar with the way these indicators work in action and then dive into trading using your knowledge.