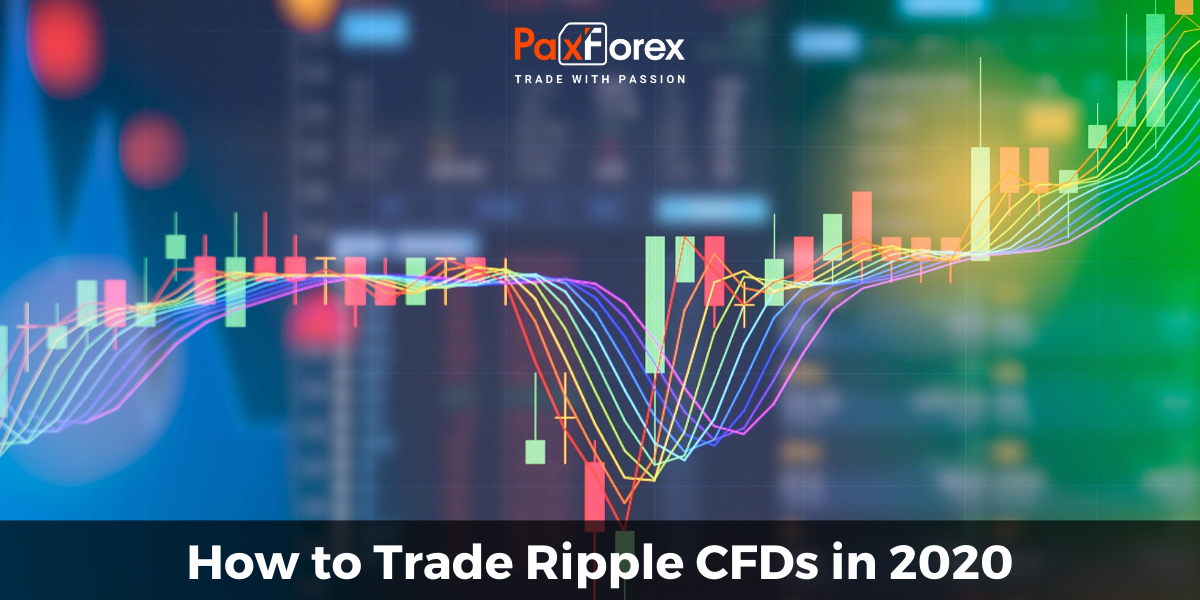 Today Ripple is probably the most famous cryptocurrency, which has found its application in the global economy and finance. Although many are skeptical about what Ripple is considered a cryptocurrency, this does not detract from its advantages and impact on traditional financial markets. Let us take a closer look at what this coin represents, what its prospects are for the near future and how exactly we can make money from it.

Ripple (XRP) is an altcoin, which along with other digital coins is characterized by anonymity, decentralized mechanism of work, a minimum commission of transfers, high speed of transactions and exchange for any fiat currency in the world. Nevertheless, in comparison with Bitcoin and its forks, whose mechanism of work is designed for a wide range of users, XRP is a highly specialized payment system, which is primarily focused on the banking environment.

Ripple was originally designed as a supplement to Bitcoin. Its development began in the early 2000s when Canadian programmer Ryan Fugger developed the first sample, which was a payment system in the electronic version of "RipplePay". However, at that time, the public did not take due interest in the project. Perhaps that would have stopped there if programmer and entrepreneur Jed McCaleb, as well as other investors, had not taken up the challenge of improving it. In 2012, after additional funding and a major upgrade, the Ripple ecosystem, XRP, quickly broke into the top three world leaders in cryptocurrencies.

The developers of the project set a goal to create a global system within which investors will have the opportunity to conduct profitable transactions with digitized funds. The priority task was to create the most advantageous conditions where the speed of processing of various operations is advantageously combined with minimum fees for them. Today the throughput of the Ripple system is higher than that of any other cryptographic currency: about one and a half thousand financial transactions take only 1 second. At the same time, the transfer time of XRP electronic coins does not exceed 5 seconds. There are almost no transaction fees.

It should also be noted that in 2019, XRP was awarded the highest rating for its ability to compete with SWIFT, the international banking system for payments, and information transfer.
But the main advantage of the system, which distinguishes it among others and justifies a positive forecast for the cryptocurrency Ripple 2020 - is the confidence of banks. The value of XRP Ripple coins is supported by the fact that most financial institutions have accepted it as a real monetary unit, a freely convertible means of payment. The level of banks' trust in Ripple Labs is steadily growing, which ensures an inflow of investors and, as a result, increases the chances of further exchange rate growth.

How Volatile is Ripple?

In the financial sphere, the basic meaning of the term "volatility" is the degree of price volatility of a certain asset. Of course, the essence of this concept is relevant to the crypto market. On a price chart of any type, falls and rises of virtual currency quotes differ.

It is reasonable to analyze the cryptocurrency market from the monthly volatility indicator. When making forecasts and working out trading strategies it is necessary to take a period not less than a quarter. There is also historical volatility of a crypto asset - it is an indicator of the degree of fluctuations in the value of a digital coin from the moment it officially enters the virtual currency market.

In the case of short-term trading practice, volatility, on the contrary, will contribute to good profit, if trading is carried out correctly, scrupulously and without force majeure. Here any decrease or increase in quotes can potentially end in profit. It is necessary to sell or buy Ripple in time.

It should be mentioned that Ripple is the leader in terms of price volatility in the TOP 20. This virtual currency is calm for most of the month, but when market activity is formed, it easily demonstrates daily volatility of 17-24%.

Volatility is the simultaneous dignity of digital coins and their lack. The benefits of substantial and fast price volatility are determined by the intentions of the investor or crypto trader regarding virtual money. Beginner traders who want to have a stable profit from the trading Ripple should first avoid volatile assets. With experience, the ability to wisely use price volatility to increase own capital will surely come. 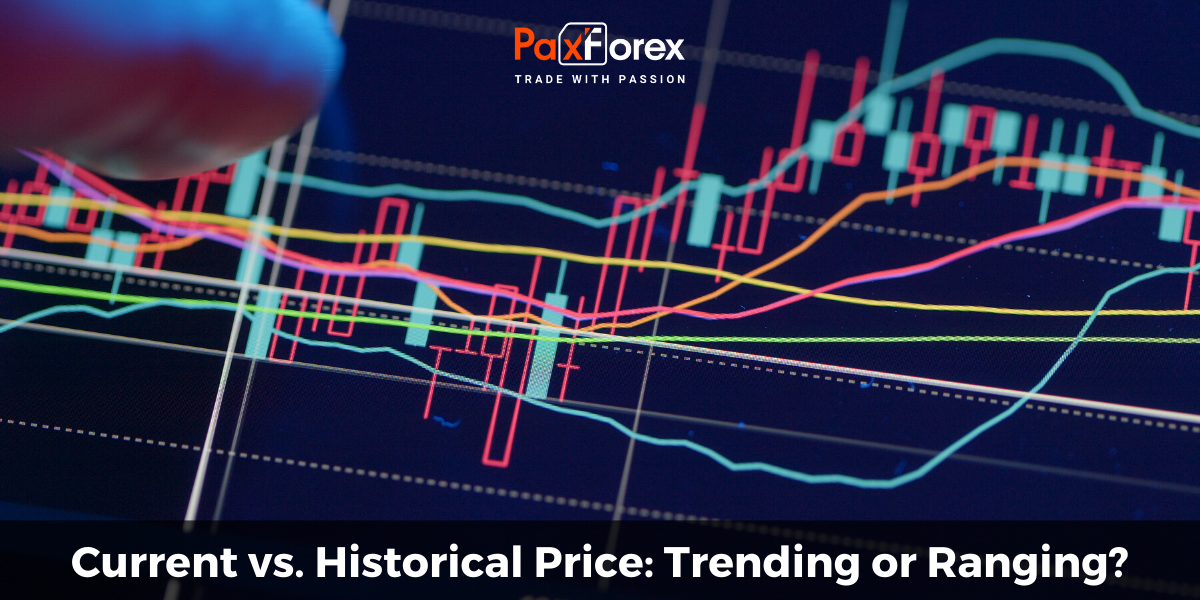 Ripple appeared on the market in 2012 with a price of about $0.005. Its value remained somewhat flat till 2017 when the whole crypto industry went through an amazing boom.
The initial price spike occurred in May 2017. Back then, XRP skyrocketed to $0.36 per coin due to the opening of Ripple’s office in Mumbai. The rates sank around the $0.20 range for the next six months.

Currently, XRP trades at around $0.18, analysts have split in two. Some are convinced that more upside is likely for the famous altcoin, while others say it has the potential to plunge drastically one more time.

If you check the dynamics of the Ripple price fluctuations, it is not difficult to see that news plays a significant role in the coin’s cost. Each time the Ripple announced a new partnership with a large bank or payment service, it would always provoke short-term rate spikes in coin.

Just like everything in the financial market, there is no straightforward answer to the question if Ripple is a good thing to invest in. The difficulty with picking what cryptocurrency to invest in is that the market is highly volatile. Its dynamics make it very troublesome to foretell what the price would be in several hours, let alone long-term predictions.
In case you are not sure about making a long-term investment, but still crave to seek profit from the volatility of the digital currencies, you can do so with contracts for difference (CFD).

How to Trade Ripple CFDs

CFD (Contract For Difference) is a derivative contract, a percentage of the value is taken from stock (or any other asset called "base") equal to 1 lot. Unlike a futures contract, here a lot can be split like a currency one to a minimum of 0.01 lot. It is called a short-term investment, as CFDs are normally applied in short time periods.

There are significant distinctions between trading Ripple as a coin trading CFDs on the crypto market. Trading cryptocurrencies entails that you keep coins on your digital wallet and while trading CFDs, the trade is kept in your Forex trading account which is controlled by the brokerage company. Of course, trading Ripple CFDs allows you to be more flexible since you are not bound to an asset, and here comes the most important advantage of CFD - you can open both short and long positions.

Which Strategy Should You Use to Trade Ripple CFDs? 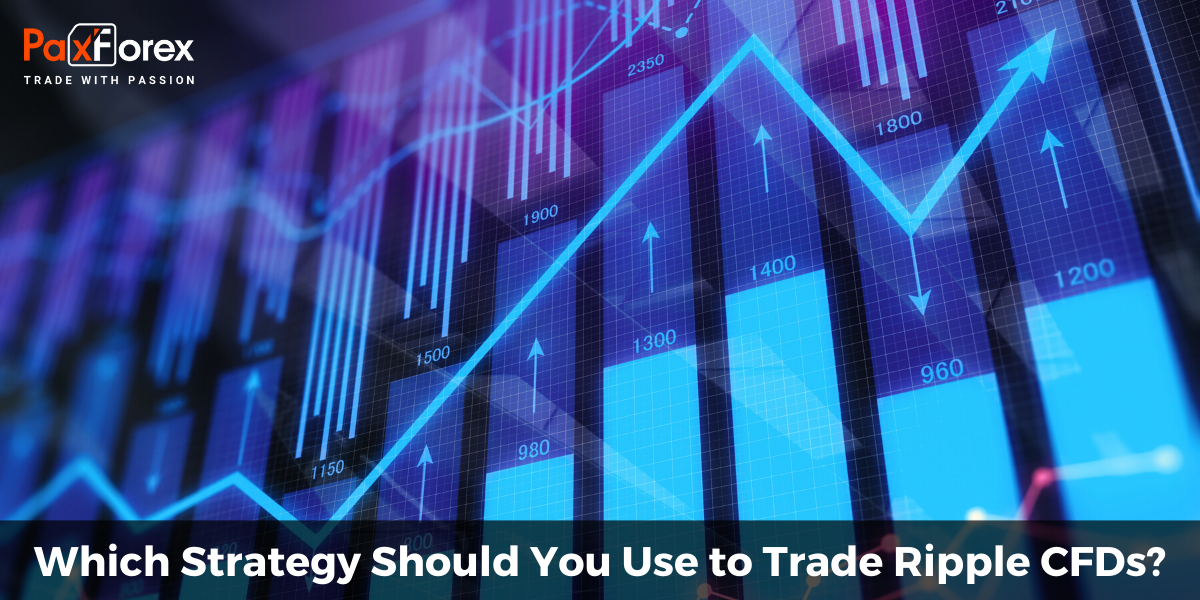 So, we have already found out that the unique idea at the heart of the project significantly reduces the market impact on the XRP exchange rate. It turns out that Ripple is a good choice for risk hedging on the market.

For example, if you draw a correlation chart with the Bitcoin, the result is very variable, and this cannot be called a stable relationship. Here we take into account that many altcoins try to go in harmony with Bitcoin.
As experience shows, long-term investment is the simplest strategy for profiting. Trading Ripple has great prospects, so if you buy on the decline, you can make good money on the next wave of growth. If you believe in the future of Ripple, right now is not a bad time to buy - the price is just beginning to recover after a long consolidation.
However, long-term investment does not mean you have invested and forgotten about that. To avoid long-term drawdowns and increase profitability, the position will have to be modified from time to time according to the current situation. The Ripple project has an official Facebook page where you can get the latest information on changes and innovations. Also, as a source of fundamental data, you can make use of any reliable website, where news about what is happening in the world, including cryptocurrency one, are regularly published.

Once you catch a wave, you can keep your position for a long time without doing anything with it. Taking into account that almost every next wave has a well-tested 61.8% Fibo correction, this level can be used to refill the trend.
Standard technical oscillators, such as Stochastic, RSI, perform well. Even without additional filters, the indicators give quite suitable signals for trading, but only if we are talking about high time frames.

Considering the relative novelty of the instrument, you can Ripple trade using any traditional strategy used for other assets. Levels, channels, graphical patterns can also be emplied. To minimize the risks, trade other altcoins at the same time with Ripple, ideally using the same strategy for each. The weak correlation of rates will help to reduce the total drawdown.
When analyzing Ripple investment, always make sure to consider the newest technical analysis, expert estimation, and market trends. It is always important to arm yourself with as much information as possible to create a victorious trading strategy.

How to Day Trade Ripple CFDs for Profit 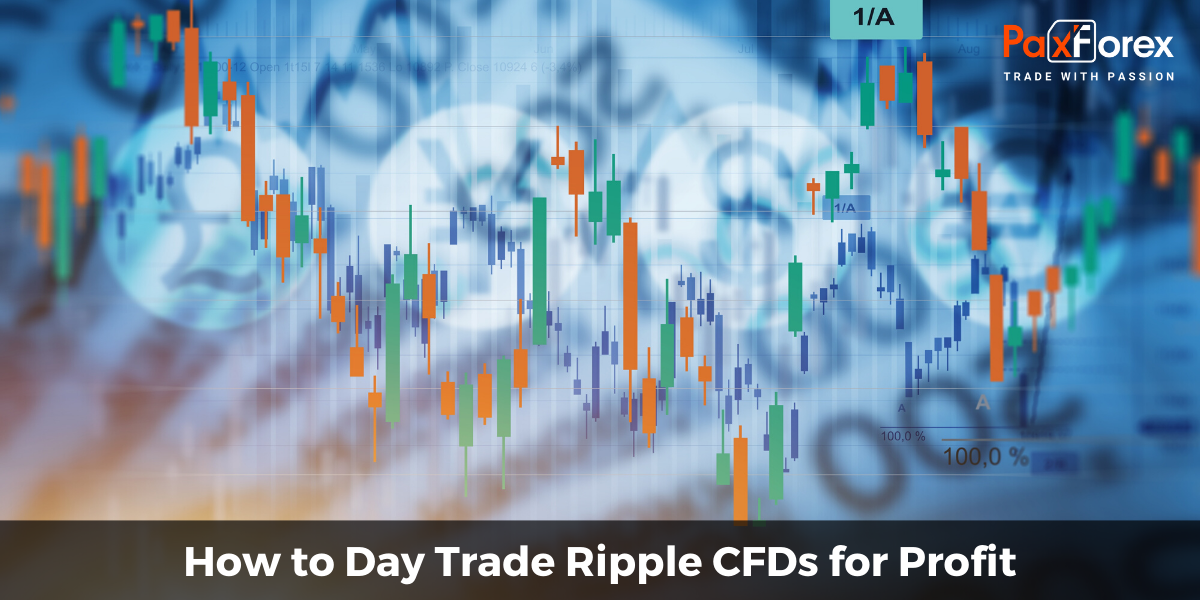 There is a lot of controversial information about day trading strategies with cryptocurrencies. People can also use different strategies, some of which make no sense. You can across "experts" who advise you to choose coins with minimal volatility. However, since volatility is a friend of the daytrader, such advice is contrary to common sense.

For you to daytrade Ripple you need to understand that:

Let`s have a look at one of the day trading approaches to trading Ripple. It's about keeping an eye on the price. Some people wait for the trend correction to happen and trade on it.
Others trade on the resumption of the trend after the correction. In both cases, you need to be able to determine the beginning and end of the correction. To do this, follow the patterns of candlesticks.

The Sushi Roll reversal pattern gives a hint. It works similarly to other candlestick patterns, such as bearish and bullish engulfing patterns, or even "head and shoulders" one. However, Sushi Roll gives an earlier warning of a trend reversal.

The Sushi Roll consists of ten bars, the first five of which are in a relatively narrow range of lows and highs. The second five bars absorb the first five at higher highs and lower lows.
Just like the bearish and bullish engulfing, which consist of only two bars, the Sushi Roll can be both bearish and bullish.
Ripple trade within a day is a game that requires patience, discipline, and emotional detachment. If you lack them, it is better to stay away from such trading.

Ripple is one of the most interesting and promising digital systems, so it should not be ignored in terms of investment, let alone CFD trading. This is not another fork of Bitcoin, which may turn into dust in the future, becoming less interesting to users. This is an innovative payment system that is being actively introduced into the banking environment, so its growth potential will not run out for a long time, and the upward trend should be expected pretty soon. Besides, the fact of a gradual decrease in the number of tokens will also increase the value of this currency over time, so Ripple is definitely an attractive investment tool. Undoubtedly, as with all digital currencies, this one is characterized by short-term rebounds, but they will not negatively affect long-term investments, and traders will even open up additional opportunities for earning.