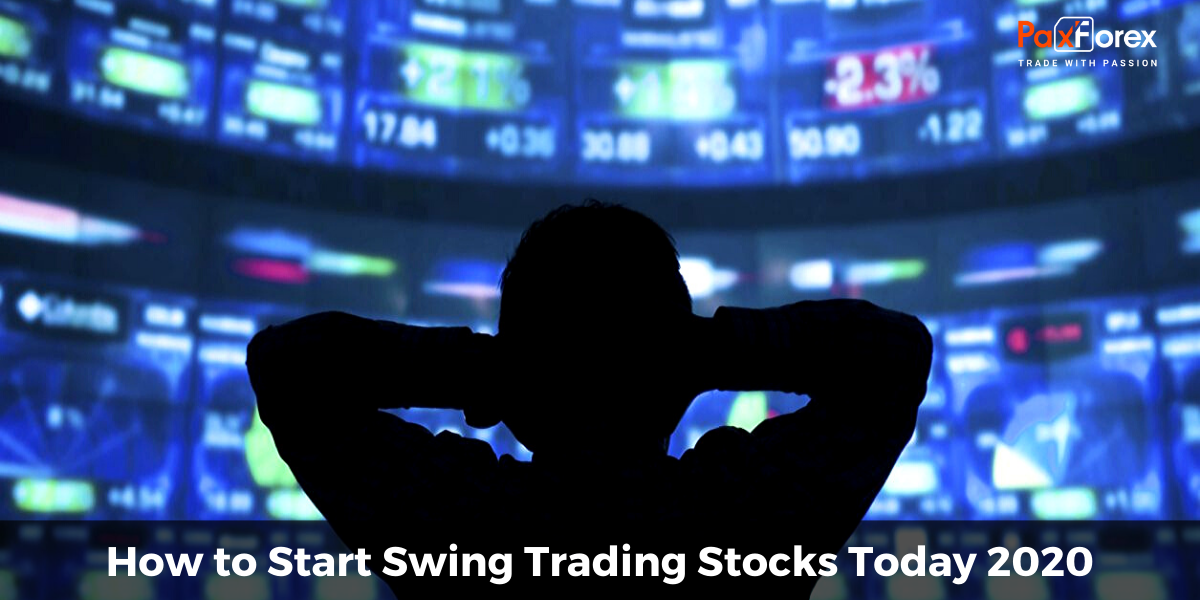 Many traders on stock exchange prefer to trade long term. This is convenient: less time is spent on trades, no need to monitor the chart for hours, the profit can be significant - more than in intraday trading or scalping.
Trading on fluctuations of 2-3 days or "swing trading" - a common tactic and is suitable for those who do not have time to be in front of the screen in the active hours of the trading session, and who nevertheless want to profit from sharp price movements in both directions (as opposed to long-term strategies).

Swing trading is a medium-term style of trading based on the cyclicality of price movements. The main idea of this method is to recognize the beginning of the cycle at an early stage and use its dynamics as efficiently as possible. The success of a trader using this style depends on how finely he feels the points of beginning and end of a separate trend movement. The greater is the volume of directional price movement that a trader has managed to use, the greater is the profit.

It sounds simple and in general similar to most trading strategies and styles. But it is worth to study this topic more thoroughly, and you understand that you are facing a very complex system. There are several advantages of swing trading, which can be an excellent motivation to study this style of trading. For example, emotional tranquility, minimal time spent on trading, excellent trading potential, and a deeper understanding of the processes that take place in the market.

But this style is not without drawbacks as well. Probably the most significant of them is that swing trading does not tolerate superficial study and frivolity in work. Of course, if you treat trading carelessly, even the most perfect trading strategy will not save from failure. But swing trading is an area where there are no minor details and questions. You must form a deep and complete picture of the market and its cycles.

How to Start Swing Trading Stocks 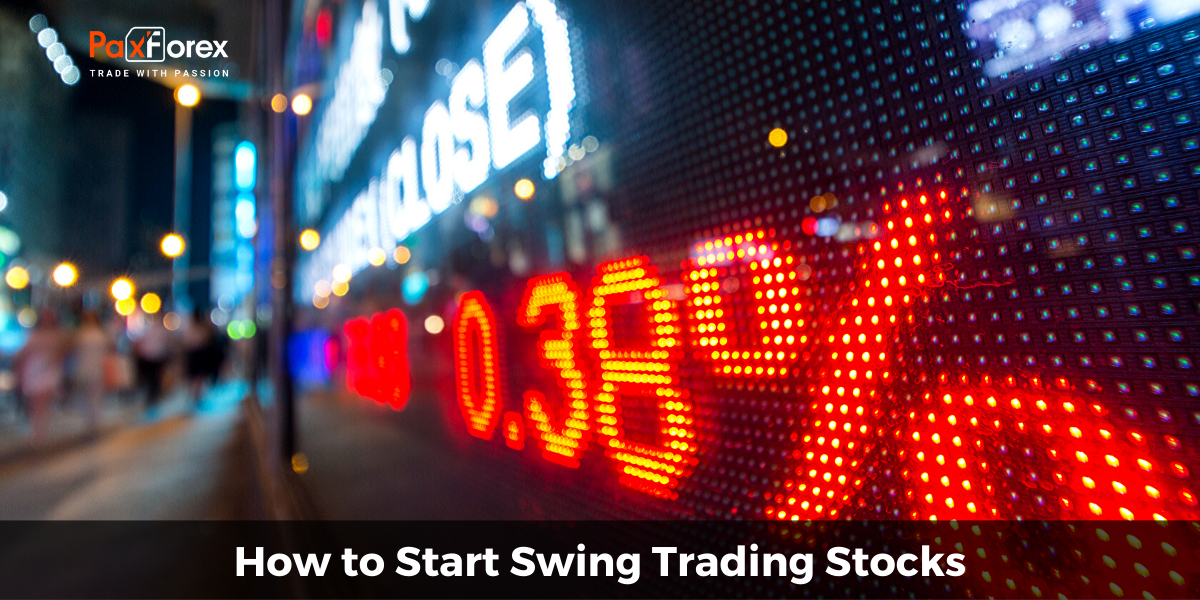 Once you have decided to try your hands at swing trading stock you have to do your homework, of course. A lot of homework since you cannot just start guessing and blindly click buttons and open whatever stocks are looking at you.
Here are the main steps of how to get started (after you`ve learned the basics):

The first step in swing trading stocks is to pick an underlying asset to trade where you have distinguished a trading occasion. Stock swing trader will regularly watch couple stocks to have a better opportunity of spotting a solid setup for a position.

While choosing stocks, look for one which is about to start "correcting" as defined by a momentum indicator, such as the RSI, for instance.

Watch to go short at RSI values over 70 and go long it at values below 30. If you need even more solid swing trading signals from the RSI, you can wait until you see something called price-RSI divergence, which suggests the price makes a further height in a move, such as hitting a new high, but the RSI fails to do that. This will be an even better swing trading signal that the market is due for an immediate correction.

Right after you have found stocks needed and applied your favored type of market analysis, whether technical and/or fundamental, to locate a trading opportunity with a sound risk/reward ratio of 2 or more to 1, for instance, next you will feel comfortable taking a directional market outlook on the underlying asset placing a short/long position.

For instance, if you think that Apple stocks are going to soar, you should place a BUY order to go long the underlying asset you wish to trade with confined downside risk and limitless upside potential.

Or, if you believed that the market was going to drop, then you would alternatively place a SELL order to go short the underlying asset.

The entry point is usually located using technical analysis. Considering swing traders trade both with trends and with corrections to those trends, they initially have to recognize the current trend, if any, in the stocks they are looking at.

While trading with the trend, swing traders will look for a remedial pullback to set a position in the direction of the trend. After the pullback seems to be losing momentum, as signaled by an RSI level in an overbought or oversold area ideally determining divergence concerning the price, they would know the time is right to enter the market. 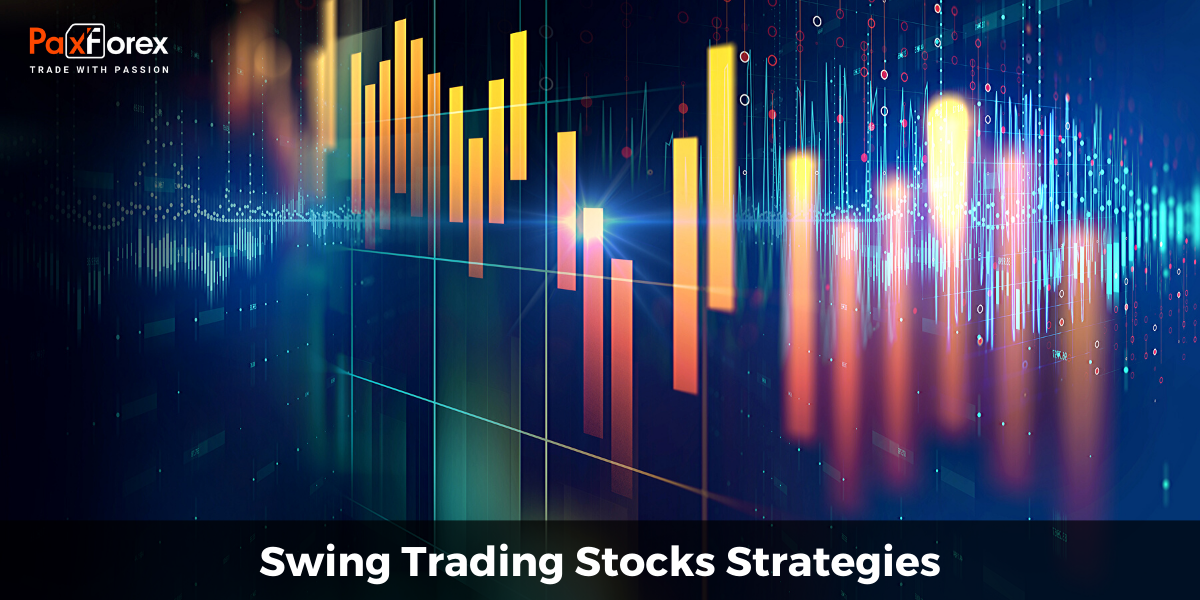 There are several different trading strategies frequently used by traders. Here are the four most popular strategies: Breakout, Breakout, Pivot, and Correction.

Breakout technique is an approach where a trader takes a position at an early stage of an uptrend looking for stocks that are most likely to "breakout". The trader enters the trade as soon as he sees the desired level of volatility and movement of the stock, which overcomes the key support or resistance point of the stock.

The breakout strategy is the opposite of breakout. The stock price goes below a certain support level, and the chart indicates that the price is dropping. Then traders follow the same fundamental signs as the breakouts.

This method uses a price change momentum when its rise or fall slows down to full reversal. This method has a good risk-to-reward ratio and works best in changing markets.

A concept that's very similar to a reversal. Correction is applied when the price is reversed within a larger trend, but not before its high or within a certain period of time. The stock temporarily returns to an earlier price level and then continues to move in the same direction.

"Harami candlestick" and/or "Harami cross" are strong figures in candlestick analysis and it is widely used by stock swing trader.

Harami means "pregnant" in Japanese. If you look at these two candles formations, you can see that the first candle is much larger than the second, as if the mother is carrying a child.
In simple words, these are two consecutive candlesticks (the first big, second small), which can signal either the trend reversal or a side flat and further continuation of the trend after it.
In the graphical plan, the "Candle of Harami" pattern is represented by two consecutive candles, the first big (mother) and the second small (child) candles. Most often they are of different colors, but it is also possible to have the same candle color.

When determining the reversal patterns using the Harami model, it is very important to determine the location of the second candle in the setup.

The model consists of a Harami cross, also a candle with a long body, and a second candle - with the shortest body (better Doji). This is a very strong reversal pattern, indicating that the forces on the exchange have changed, the second candle must be closer to the middle of the body of the first. Otherwise, this reversal pattern successfully turns into a trend continuation pattern. 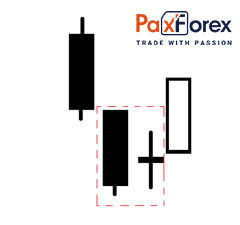 The bullish model appears only after a long bearish trend. It is defined very simply: a large bearish candlestick at the beginning of the pattern and a small candlestick inside the body of the candlestick, which should be located approximately in the middle. The main thing is not to forget to confirm the signal with the additional candle. 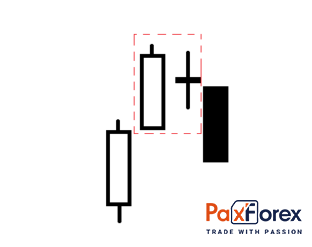 The bearish Harami is formed immediately after a long bullish trend. Its interpretation is mirrored by a bullish Harami.
An important advantage of the pattern is the ability to set a fairly short Stop Loss. Thus, when entering a position immediately after the confirmation candlestick, it is recommended to place a Stop Loss order at the Doji level. And to fully guarantee that the set order is not knocked out by random price volatility, it can be set to the previous local extremum formed by the first candlestick pattern.

When trading on candlestick patterns, you should pay attention to the chart time frame. As with all patterns of Japanese candlesticks, the reliability of Harami signals is mainly manifested on medium and high time frames (M30, H4, and higher). Proximity to local highs and significant lines (support/resistance, Fibonacci, etc.) may give additional reliability to the figure.

Technical analysis is the basis for much of swing trading. Indicators can be applied, but do not forget - these instruments are derivatives, they are usually lagged. After all, a swing trader looks ahead to the market:

Although there are tactics on two- and three-period oscillators in swing trading books, it is necessary to have an additional condition to enter the swing trade stock, that is, a filter.
For example, it is possible to trade ascending triangular.

Every trader chooses for swinging trading simply convenient, such that he understands.
Moreover, most traders use the RSI indicator which may be of great help. This indicator is based on the ratio of recent stock growth to its recent decline.
Using a simple formula, these price dynamics values are transformed into values between 0 and 100 and displayed on an RSI side-scale. The closer the indicator values are to zero, the more so is the oversold stocks. And vice versa, the higher they rise, approaching to the hundred, the more overbought the stocks are.

Firstly, RSI perfectly informs us about the presence of a rollback in an upward or downward trend. Secondly, overbought or oversold signals appear just when the action is about to reverse; that is, the reversal points are identified. Third, the RSI can be included easily enough in the filter to select stocks for swing trading. In the latter case, some important stocks will not appear on your list because not all rollbacks are signaled by the RSI as overbought or oversold.

Swing trading stocks can be characterized as professionalism on the brink of art. Deep knowledge of theory, knowledge of many trading tactics, and ability to quickly find non-standard combinations are the first requirements for a trader who chooses this trading style. But to become a truly successful swing trader, you need to understand and feel the processes taking place in the market. The cycle model, price models, volumetric methods of analysis - these are the areas, where it is also necessary to constantly develop.
It is not easy at all to become a swing trader. But if you set such a goal, after some time you can consider yourself a really "universal soldier" who will be able to get an outstanding result in any conditions and with the help of any tools.