How To Trade Using The Doji Candlestick Pattern 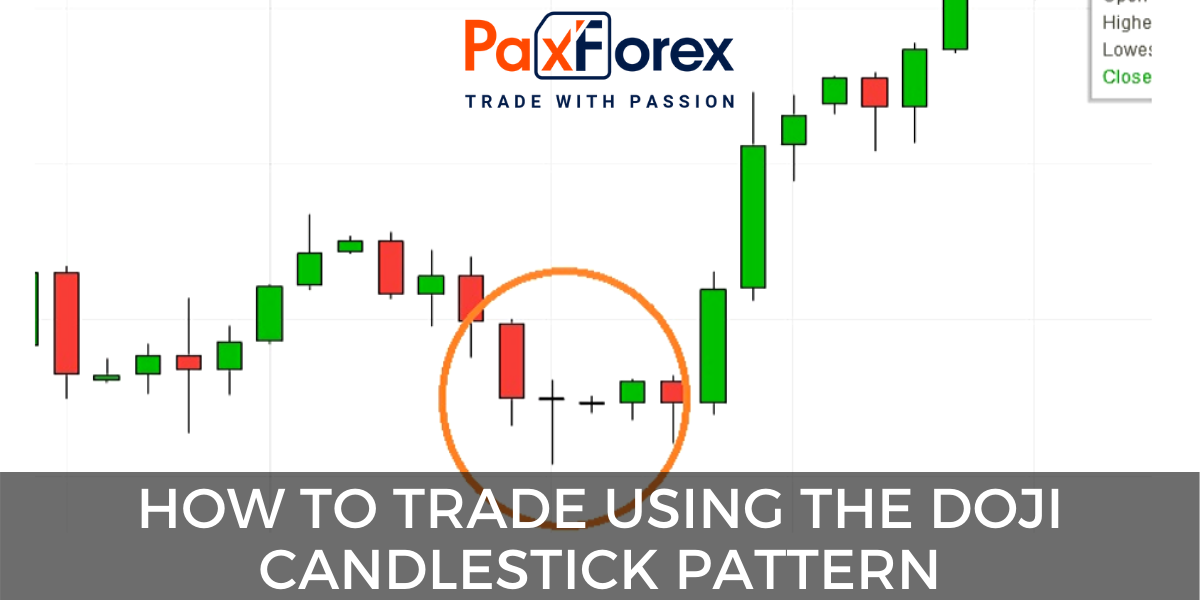 Traders who use Japanese candlestick charts to trade swear by this method. And there are some very good reasons for it. Candle charts provide a good amount of useful information, even without any additional tools and indicators. Today we are going to talk about types of Doji candlesticks and how to use them for profitable trading.

What is Doji pattern

Dojis might be hard to spot on the chart right away, but they carry a lot of meaning and serve a really important role in candlestick chart analysis. The meaning of a Doji candlestick is perfectly reflected in its name: “Doji” in Japanese means “no changes” or “the same”. This way, Doji is a single candle pattern that appears when opening and closing prices are the same.

Now, while the candle alone does not seem to tell us too much, its specific shape and location at the chart are real game-changers. The true meaning of Doji is that the powers of both bears and bulls at the market are equally high and neither can drag the market into their direction. This way the candle signals mostly for an upcoming burst of action in either direction.

In order to use the Doji candles for effective analysis and forecasting, it is important to know about the different kinds that exist and their meanings. Next we are going to talk about the meaning of Doji candle when it takes a certain form.

How to analyze Doji candlestick

There are five commonly recognized types of the Doji star pattern, they are: Doji Star, Long Legged Doji, Dragonfly Doji, Graveyard Doji and Four Price Doji. The colors of Dojis are assigned semi-randomly, since technically they are not bullish or bearish, so you can simply disregard the color of the pattern and only look at its shape and location. Let’s take the next few moments describing how each of these candles look and what to expect when they appear on the chart.

Doji Star is the most commonly appearing pattern that looks like a small plus sign. This candle indicates two things: neither bulls nor bears are taking control yet and there is very little volume during this period. Doji Stars are often interpreted as early signals for current trend reversals, but this also has to be backed up by additional info.

The Long Legged Doji pattern is the same minimal dash as the Star, but the wicks of such candles are long on both sides. The stretch between the highest price and the lowest one points out to large volume, meaning that even though the market is still indecisive, there are great amounts of trades on either side. Long legged Doji bearish or bullish appearances can also signal that trend might soon reverse.

Doji Dragonfly is a formation that slightly resembles capital “T”, although sometimes an upper wick is also present, but the lower one overpowers it with length. Dragonfly Doji carries the most powerful signal when it appears at the end of an ongoing long downtrend. This candle will show that although the bears are strong, the bulls are fighting back and about to take their desired position.

Gravestone Doji candlestick is an upside down Dragonfly, where the top wick is much longer than the bottom one. Similar logic applies here, just reversed: bulls are strong but bears are getting stronger. To successfully confirm Doji Gravestone as a reversal signal wait for it to appear in an uptrend and act when the next candle forms after it. Traditionally it can be a Long Legged Doji.

Four Price Doji simply looks like a dash or a minus sign. This is a very clear indicator of extremely low activity, since open, close, high and low all stayed at the same level. This pattern occurs on charts for less popular instruments, such as the exotic ones. The best way to use this candle is to walk away from trading when it keeps appearing and either switch to another pair or come back to the market later on.

Dojis are very easy to spot after you have been practicing for some time. In combination with follow-up candles they can serve as a wonderful tool. However, it is also important to become familiar with other pattern types in order to get the most out of Japanese candlestick chart trading.