How To Read And Understand Forex Quotes - Explained 2020 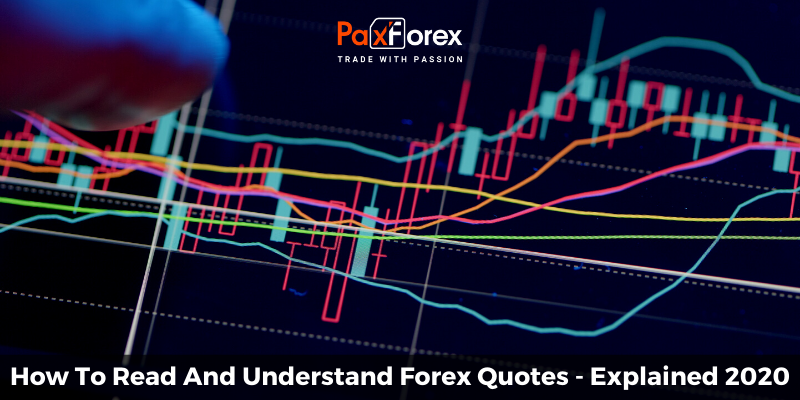 For any trader it is crucial to have basic skills that are necessary for trading on Forex, reading charts refers to them. When you are done with training, forex terms, and will implement trading in practice, this skill will not only be useful but will greatly facilitate the work.
If you do not have any trading experience, you may encounter many difficulties and pitfalls while reading the Forex quotes. If you read this article carefully, you will discover how to understand the Forex quotes, as well as get the knowledge that will for sure come in handy.

In the forex market traders have the opportunity to buy one currency for another. In case you aim to buy euros for dollars, the forex broker provides you a quote - i.e., the value expressed in U.S. dollars, for which at the moment another market participants are willing to trade 1 euro. To simplify the perception of information, Forex quotes are written in the form of abbreviations, where the first place is given to the currency you want to buy. In the case of the dollar and the euro, this quote will look like EUR/USD.
Each of them has its own three-letter ISO code. Generally, the first two letters indicate the country in which the currency is issued and the third letter indicates the name of the currency. The most liquid of them are the U.S. dollar (USD), euro (EUR), Japanese yen (JPY), British pound (GBP), and Swiss franc (CHF). The value of one currency is constantly fluctuating relative to another - rising or falling. Thus, the U.S. dollar might decrease versus the euro but rising against the New Zealand dollar. Therefore, currencies are perpetually exchanged in pairs and quoted against one other. Prices of currencies in a pair are separated by a sign "/" - EUR/USD, USD/JPY, GBP/USD, etc. A currency pair is a ratio of prices of the currencies included in this pair. For instance, the rate of the USD/CHF pair displays how much CHF you can buy for 1 USD. Currency pairs are divided into three groups according to their fundamental characteristics: Major, Minor, and Exotic. The first group is the smallest one, but this does not prevent it from leading by trading volumes. About 75% of all operations in the Forex market belong to currency pairs belonging to the main group. The greater part of the Major group consists of pairs formed by two most liquid world currencies at once. Here are the most widely traded pairs:

The first currency in this record is called "base currency" - you buy it for the currency, the designation of which is in the second place, it is called "quote currency". On the Forex market, all the currencies are traded exactly in the form of currency pairs. Their abbreviations are clearly defined, and they never change. For instance, any broker allows you to trade the currency pair GBP / USD (British pound for the U.S. dollars), but the symbols USD / GBP you will never find - this record is incorrect.
Moving to the quote value, we can`t but mention that Bid and Ask prices are among the most basic concepts when trading currencies, shares, as well as other assets. Most, if not all, beginner traders get pretty confused by these notions, so you need to clearly understand the meaning of these terms.
Forex Bid and Ask are indicators that characterize a currency quote, or better to say the prices at which you can sell or buy the currency.
Looking at a live quote Forex broker gives you, you can see the following entry EUR/USD bid 1.1252 ask 1.1256, which says that the euro can be bought at 1.1252 dollars, and sold at 1.1256, 4 points more expensive.

Bid - the buying price at which you can sell your existing currency, or if it is a forex trade, just place a sell order. The value of this indicator is regulated by the base currency offers in the quote, the more willing to sell the currency, the lower the bid price.
In case you open a short position at this price you need to buy the currency even cheaper, only in this case you will make a profit.
In addition to forex, this concept can be encountered in any exchange office, banks also buy currency at the bid price, and sell it to customers at the ask price, while the spread (we will talk about it in a moment) size here is more substantial than on the exchange.

Spread is one more fundamental notion to learn before starting to trade. It’s a difference among the best Bid price (the cost at which the base currency is sold) and the Ask price (the price at which the base currency is bought) at the same time.
The minimum spread on the platforms is set by the market maker, in the further chain to the final trader the spread increases as it is also the salary for dealing desks and brokers in the form of commission for each position traders open.

Spread size is a criterion of market liquidity - the higher its value, the lower its liquidity. That is why when trading popular pairs, the spread has small values. For example, when opening order for the EUR/USD pair we see the quotes of 1.1302/1.1306 The spread value for 1 lot is three points (or $30).
When placing an order, the trader immediately sees a loss on the account equal to the value of the spread. For example, if you open a long position of two lots in the EUR/USD pair with the quotation 1.1302/1.1306, the initial loss will be $60 (3 points of spread x 2 lots).
For this position to move to the break-even point, the Forex quotes should change towards the direction of the trade by at least 2 points. Likewise, the price should proceed even more in the direction you have chosen to get profit.

Spread can be compared with the commission, which is automatically deducted from the account at the moment of placing an order, buy or sell. For an honest and reliable broker, the spread is the only way to make money so the company is more than interested in your opening as many trades as possible. Moreover, at stock exchanges, to regulate market liquidity, spread limits are set: if its maximum value is reached, then trading is stopped automatically.
In Forex trading spread can be either fixed or variable.
The fixed spread remains unchanged regardless of the speed of the trend or demand and supply of the currency, trading with it is the most predictable, because you know for sure how much the price of the currency should change to start making a profit.

On the other hand, variable one is the most common. It fluctuates within a certain range under the influence of market conditions, with the broker indicating only the lower limit of this range. As a rule, the variable spread on popular pairs is within 2-5 points in case of calm market conditions, and on the news release, it can reach 50 points or more. Therefore, trading accounts with variable spread are unprofitable for trading robots and Expert Advisors, because automatic strategies can not quickly take into account changes in the spread.
What does the forex spread size depend on?
The size of the spread depends on:

For major currency pairs, the spread is several points, usually within 10, unlike exotic cross rates, where the difference between buying and selling can be dozens of points.

The spread increases during active trading on currency pairs, i.e. - at volatility. As a rule, such situations are observed at the release of important news affecting the Forex market as a whole. Also, the spread widening is observed at low liquidity, which is inherent in the "night" and "holiday" Forex market. 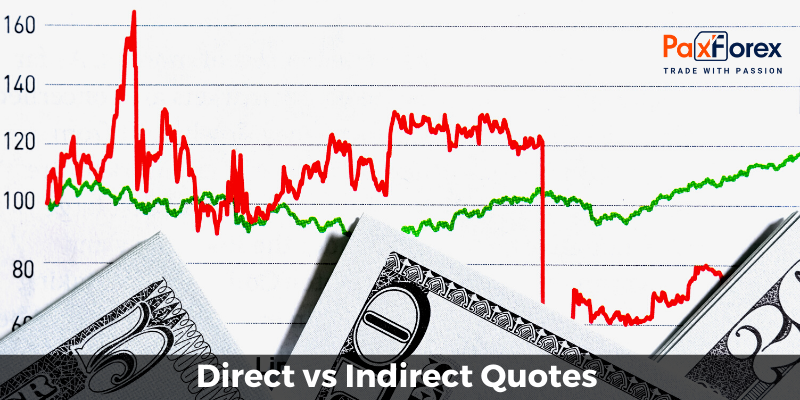 On the domestic currency market, it is usually accepted to record the rate of the national currency against another currency in the form of a "direct quote", i.e. the rate of foreign currency value is expressed in units of national currency. For example, a USD/CHF quote will be a direct quote for Switzerland. Because in Forex the concept "national currency" does not exist and the U.S. dollar is used as the world reserve currency, the concept of "direct" and "indirect" quotes is applied depending on the place of the U.S. dollar in the quotation. In some currency pairs (USD/JPY, USD/CHF, etc.) the U.S. dollar is the base currency, in some (EUR/USD, GBP/USD, etc.) - the quote currency.
Live quote Forex value of the currency pair GBP/USD equal to 1.6253 means that one British pound can buy or sell for 1.6253 USD. Thus, all transactions (buy or sell) are made with the base currency, i.e., in this case, with the pound sterling.

Considering that in the forex market all operations are carried out with currency pairs, to describe the operations, it is customary to say, for example, "sold GBP/USD" or "bought EUR/USD". That implies, in the first case, selling pounds for the U.S. dollars, while in the following - buying euros for the U.S. dollars. In other words, even though the positions are opened with currencies, the concepts of "buy" and "sell" are mainly applied by market participants to currency pairs as trading instruments. 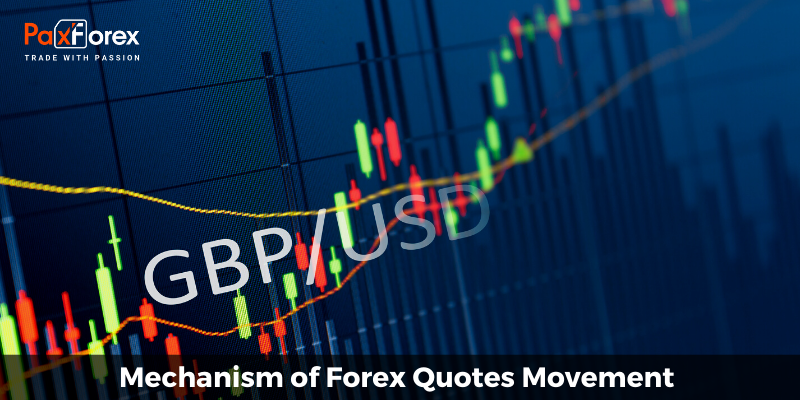 Now let us move on to the issue of changing the currency quotes.
This is, in fact, the most important issue, because it is the change of quotes in a greater or lesser direction that brings income to your trading account. Your goal, as well as that of any businessman, is to buy cheaper, sell more expensive, or sell more expensive, buy back cheaper.
Changing currency rates for direct and indirect quotes is opposed. An increase in the value of a direct quote, for example, EUR/USD, means that the euro is becoming more expensive and the dollar is becoming cheaper at the same time, i.e. more U.S. dollars are "placed" in one euro. Conversely, a decrease in the value of the quote of this currency pair shows us that the U.S. dollar is strengthening against the European currency.

The minimum possible value of the quote change is one point. As for the majority of the currency pairs, one pip is one ten-thousandth (0.0001). But for example, for the currency pair USD / JPY - it is one hundredth (0.01). In w consider an average trading day, the major currency pairs change up or down by 200-250 points. It is these changes make it possible for Forex traders to get the most out of the price fluctuations on the market.
Calculation of the value of one pip is performed in U.S. dollars in direct quotes, in positions with indirect quotes a simple method of calculating the value of one pip is used.

If you're looking for a reliable broker with the best trading conditions, you`ve got to the right place! Trading with PaxForex you will access the wide range of markets, including currencies, shares, and more. Apart from that, you are liable to the leverage of up to 1:500 and the spread from 0.4 pips.
The security of client funds is ensured by their storage on segregated accounts, separately from the company`s funds. With the 4 types of accounts offered, there is something that will suit your style and financial goals, you can be sure. Open a live account and discover all the beauty of trading with PaxForex