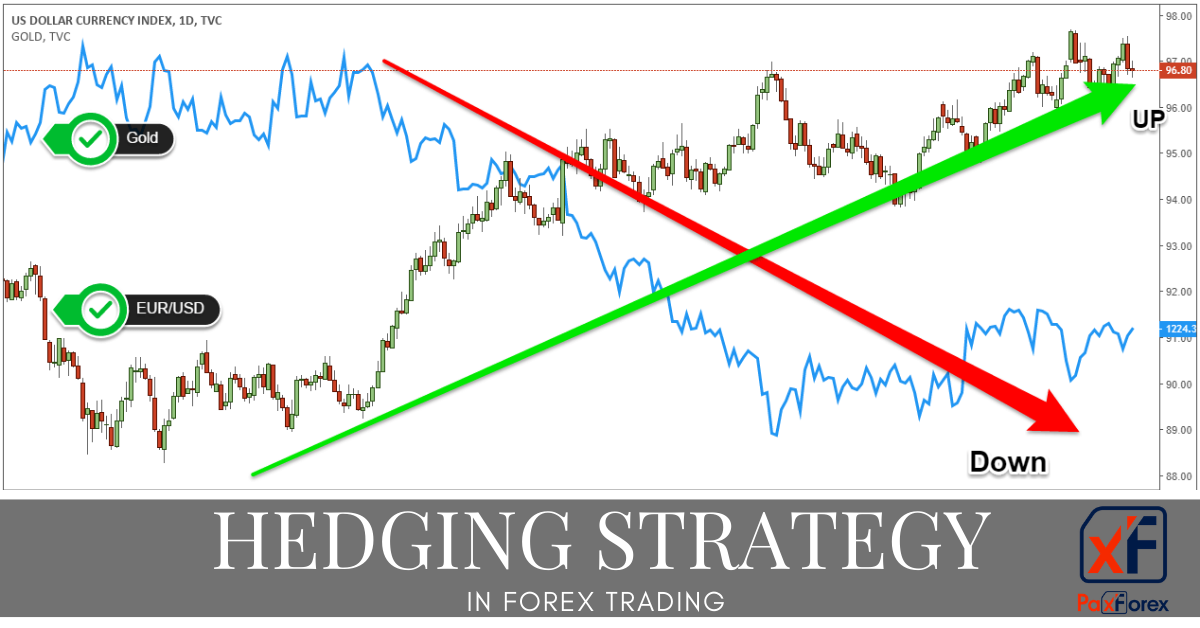 In trading financial markets there is such a notion as risk hedging. It appeared long ago and was initially used by companies carrying out the trading activity. It turns out that mastery of this technique can help reduce the risk of this or that trade. Since currency risk hedging is defined as holding two or more positions simultaneously. Its purpose is to compensate for losses on one currency position by the profit gained from trading another position.

What is hedging in Forex?

In simple words, hedging is the compensation of losses from one trade to the profit received from another one.
The term "hedging" is most often used to define financial risk insurance (changes in asset price, interest rates or currency rate) employing derivative instruments - standardized derivative contacts, futures or options. However, other examples of the paired operation of instruments are not excluded as well.
The hedging mechanism is to create a balance between liabilities in the cash market (goods, securities, currency) and futures. For example, to protect against financial losses, a partner position may be opened for the selected asset, which in case of an unfavorable coincidence of circumstances will be able to compensate for the losses.

PURPOSE OF HEDGING IN CURRENCY TRADING

The purpose of hedging is not to make a profit. Its main objective is to reduce losses resulting from unexpected price movements.
In the currency trading risk hedging can be used for three purposes:
Reducing the risk of possible losses on the main position;
Bringing a loss-making position to breakeven;
Receiving income on one or both positions at once.

What should you take into consideration?

When hedging currency risks, it is necessary to consider the following:

The difference in the movement of currency pairs.
To hedge a losing pair, you need to find another currency pair that has a strong positive or negative correlation. That is, the pair that either goes the same way as the pair on which you have an open trade, or the pair that goes opposite (mirror);

The difference in speed.
The second pair, on which the opposite trade is opened (if they are unidirectional) or the trade in the same direction (if the pairs are differently directed) - should be faster than the first. To bring profit, the pair must have time to pass a greater distance and cover the resulting loss or bring profit;

Using a pair with no weak currency.
Depending on which currency gives a drawdown in the pair, it is necessary to choose a currency pair in which there is no unprofitable currency or to open an opposite trade on a unidirectional (with positive correlation) pair.

It is necessary to open a trade with the equal volume.
If you have an unprofitable trade with a volume of 1 lot, then the second trade should be opened with the same volume. Under no circumstances should you open deals with large volume in the hope of quickly recouping the loss and getting profit;

Swap accounting (position roll over to the next day).
As a result, a decent minus or vice versa may be added for a week or more while the trade is being opened, which will help you get out of a bad deal.

Solid capital.
Forex hedging requires solid capital. For example, if you want to use the GBP/JPY currency pair for this type of strategy by trading in standard lots, you will need to keep about $20,000 in each of the accounts. This is an important point because, for the GBP/JPY pair, the maximum monthly range in the past years was 2000 pips.
So, trading standard lots, the amount will be approximately $160. Therefore, when you place an order, you will automatically lose $160. Thus, it will take the first six days to cover the spread. And if you get a "margin call" for one position, you will have to close the second one and then transfer the necessary amount from one account to another, then reopening new orders. Each time you lose $160. Hence, it is very important not to bring the case to forced closing of the trades.

Forex hedging as diversification
This method can also be partly classified as a hedge. So, you distribute money in the account between several assets. This way, if you fail on one of them, you can compensate for your losses.

You can diversify in different markets and with different types of assets. For example, the technique of buying options is also a diversification of risks. However, in our example, it is the opposite. But it makes no sense to place a BUY trade on EUR/USD and a CALL option for the same currency pair.

Hedging strategy with the help of locks
This very Forex approach is offered on many training websites. It is presented as one of the best and indeed, at first glance, it looks exactly like this. But the nuance of this system is that it does not solve issues, but only creates new problems.

It is classified by three types of locks - zero, positive and negative.

Zero locks are the opening of two positions in different directions at the same price. It is used quite often by traders, especially beginners. The essence of it is that you open two positions and then close a losing one. Part of the profit is consumed by a losing trade, but in the end, you earn.

A positive lock is a consecutive opening of two positions in different directions. Let's say you bought a EUR/USD at 1.0700. After a while, the price reached 1.0780. So your trade is "in the money". But according to the situation on the chart, you can see that there may start a slight correction, on which you want to make money. Accordingly, you're selling the same asset at 1.0780. It turns out that you have two open positions on this currency pair. The lock is called positive because you open the second trade while the first one is positive.

A negative lock is a lock that you open when you are "out of the money". Let's look at an example. You buy a EUR/USD at 1.0700. After a while, the price goes down and at 1.0680 you decide to open a short position. You have two open positions. This lock is the riskiest because if the trend changes, you will have to wait a very long time when your first trade will be at least in a breakeven. On the other hand, you can close both positions and lose as little as if you had not opened the second trade.
Such strategies are recommended for novices to open as many trades as possible. But in practice, locks help you to lose your deposit more promptly. Beginners are often confused in such layers and suffer losses.

All in all, strategies of risk hedging on Forex are considered to be quite effective approaches to avoid losses, as well as to increase possible profit. However, it must be understood that hedging has its risks, so it is vital to thoroughly analyze all factors when choosing a risk hedging strategy.

Why Trade With Paxforex?