For the first time since 2005, the 2-Year/10-Year yield curve inverted in the US bond market. An inverted yield curve means that the yield on 10-Year Treasuries trade below the yield of 2-Year Treasuries, suggesting that bond traders don’t see a bright future ahead. The yield moves opposite of the price, so as yields drop the price increases. The majority of analysts and economists view and inverted yield curve as a messenger for a recession. The last five times this inversion occurred, the US economy entered a recession. While some may debate if yield curves can predict anything at all, it is a clear sign that the global economic picture is darkening.

In March of this year, the first sign of stress in the pipeline flashed when the 3-Month Yield eclipsed the 10-Year Yield. The inversion remained intact for the most time since then. The 30-Year Yield dipped below 2.00% for the first time in its existence and negative yielding debt now totals over $16 trillion globally. Usually, a recession follows the inversion anywhere between six months and two years. There is a minority which argues that this time is different, but data doesn’t support their argument.

As a result of the growing recession signals, the markets have now fully priced in an interest rate cut in September. The consensus calls for a 25 basis point cut while some argue for a 50 basis point cut. The trade war US President Trump started with China has ultimately forced the hands of the central bank and some see this is a clear sign that independence of the Fed is an illusion. Yesterday’s inversion resulted in the worst single day drop for the Dow Jones Industrial Average for 2019, dropping over 800 points. 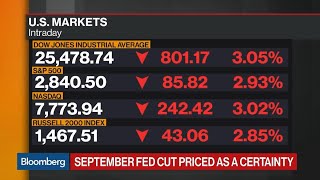 AMP Capital Investors Nader Naeimi noted “We’re heading into a global recession and central banks don’t have much ammunition to counter it.The huge shock from the trade war has basically offset whatever central banks are doing, and that’s some of the signals from the yield-curve inversion.” Goldman Sachs Praveen Korapaty added “From the pace of the move, I suspect some long-held steepeners are being unwound as well.” With the Fed now expected to cut interest rates further, will this push the US Dollar into a steep sell-off as long-term buyers will give up on it and adjust to economic reality?

Is a Recession Looming?

As traders are starting to reallocate assets as a result of the rise in recession fears as well as a forced US Fed in an interest rate cut cycle, is a recession looming? The red flags have been there since last year which would make a recession in the fourth-quarter of 2019 or the first-quarter of 2020 a very likely scenario. As the global economy has been cooling since 2018, the US bond market as well as the US Dollar have attracted safe haven capital flows despite being at the center of the turmoil. The most recent developments are likely to initiate a reversal of this trend. Will US President Trump finally get lower interest rates and a weaker US Dollar at the cost of a recession?

Join one of the fastest growing forex trading communities at PaxForex where you earn more pips per trade!

In his usual manner, President Trump blasts the Fed under leadership of Jerome Powell, whom he appointed to lead the Fed. He tweeted “Spread is way too much as other countries say THANK YOU to clueless Jay Powell and the Federal Reserve. Germany, and many others, are playing the game! CRAZY INVERTED YIELD CURVE! We should easily be reaping big Rewards & Gains, but the Fed is holding us back. We will Win!” The 2-Year/10-Year yield curve inversion is only one of the recession indicators flashing red. The New York Federal Reserve Recession Probability Index is at 31%, close to the highs since the 2008 global financial crisis.

Head of Global Strategy at TDB, Richard Kelly, stated “The curve inversion to this point is flagging a 55-to-60 percent chance of a U.S. recession over the next 12 months. We can all debate whether those signals are as accurate as they once were, but we still seem to be in a slow grind lower for sentiment and momentum and need some positive surprises to change those trends.” One thing is for sure, the global economy is slowing down. It appears that the US is heading for a recession faster than most economists and analysts are willing to make adjustments to their previous calls for the US and the US Dollar. 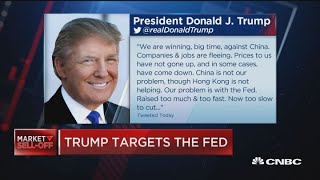 As Trump continues to blast the Fed, RBA Deputy Governor Guy Debelle sounded a bit more upbeat on the US economy. He noted that “At the moment the U.S. economy is actually growing above trend so they’ve got a fair way to slow from here.” As the saying goes: “The higher they rise, the steeper they fall.” The US economy is not immune from a recession, as plenty of historic evidence supports, and is likely to close the gap from growth to recession rather fast. Ensemble CIO Damien Loh simplified it and stated “Yes, recession is coming.” The US inverted yield curve is sending a strong recession signal, the Fed is likely to slash interest rates as low as 0% by the end of 2020 and the US Dollar is not shielded from this combination.

The most recent rally in the USDCAD is fizzling out and bullish momentum is being depleted by its secondary descending resistance level which sis located just below its horizontal resistance level. With chances for an interest rate cut by the Fed on the rise, the US Dollar is poised for an extended move to the downside. Price action is expected to accelerate to the downside, complete a breakdown below its primary ascending support level and extend its slide until it can challenge the lower band of its horizontal support area. Forex traders are recommended to sell any rallies in the USDCAD into the lower band of its horizontal resistance area. 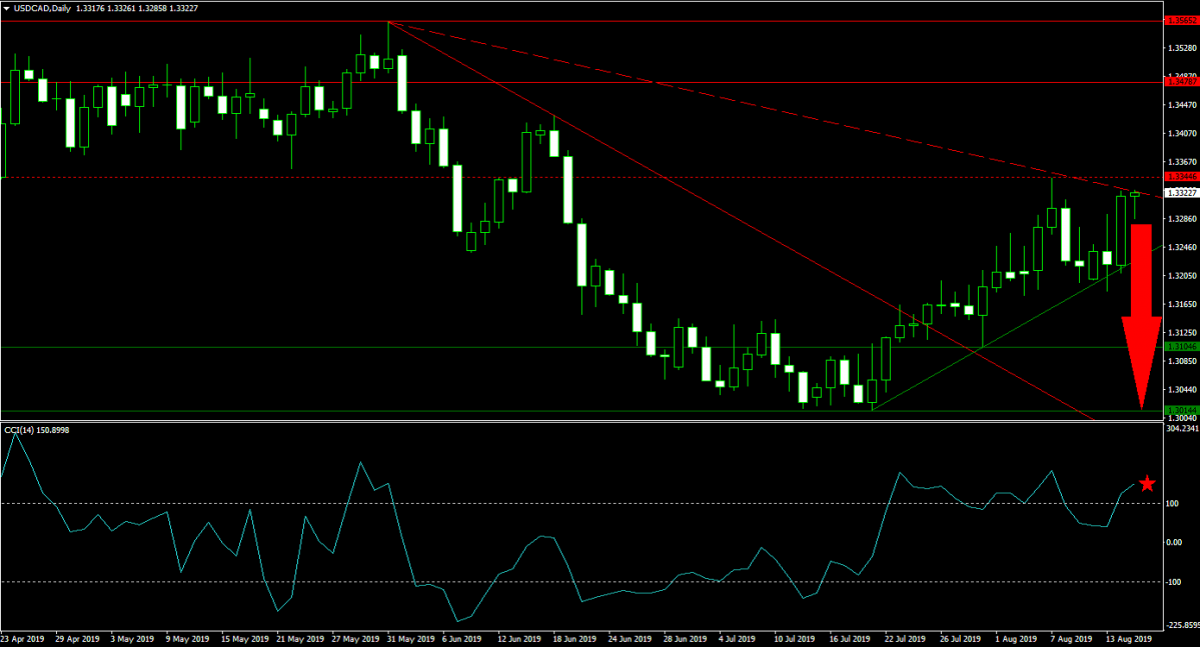 The CCI is trading in extreme overbought territory, but a negative divergence has formed which signals a bearish trend. A move below 100 is likely to accelerate any sell-off in this currency pair. Open your PaxForex Trading Account now and earn more pips per trade!

Bullish momentum in the USDPLN is being depleted inside of its horizontal resistance area. The current D1 candlestick has formed an inverted hammer at resistance which resulted in an additional bearish trading signal. The US inverted yield curve is adding to downside pressures on the US Dollar and price action is expected to complete a breakdown from current levels. This can take the USDPLN back down into its primary ascending support level. Selling any rallies in this currency pair into the upper band of its horizontal resistance area remains the favored trading approach. 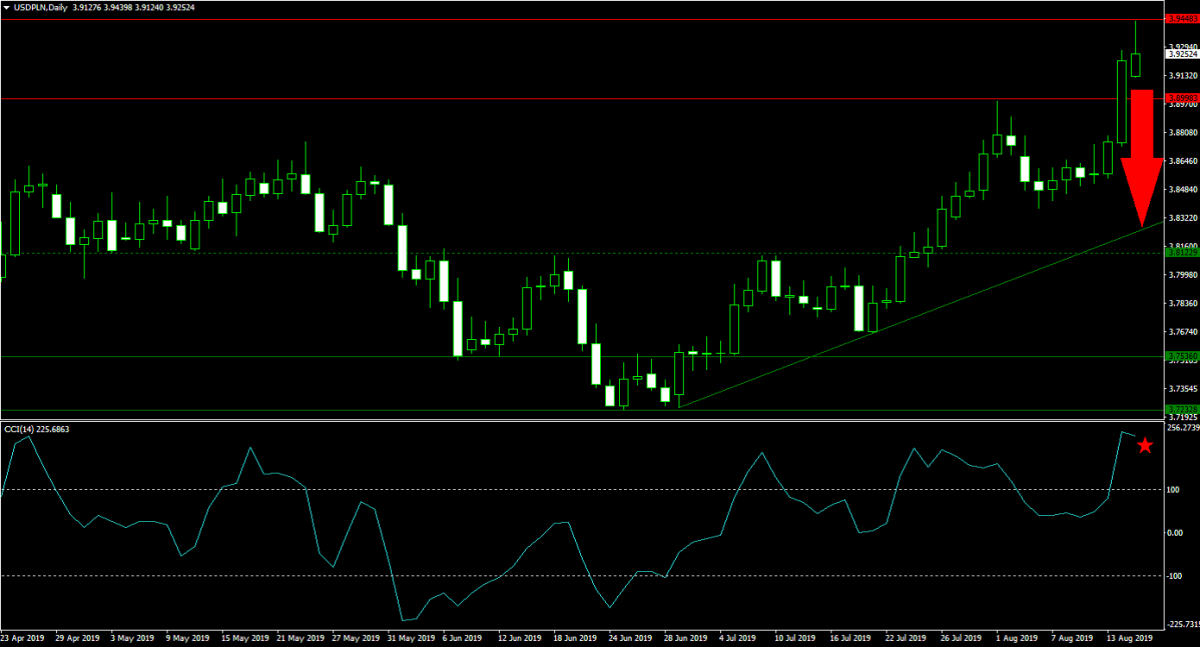 The CCI spike deep into extreme overbought conditions and recorded a new 2019 high, but it started to move away from this level. This momentum indicator is now anticipated to retrace its spike and move below 100. Subscribe to the PaxForex Daily Fundamental Analysis and take the profitable side of this trade.

Price action is currently being rejected by the horizontal resistance area which is favored to result in a momentum change to bearish, aided by the rise in negative momentum surrounding the US Dollar. The USDNOK is anticipated to complete a breakdown and accelerate to the downside. Bearish momentum is expected to suffice for an additional breakdown below its next horizontal support level which will clear the path for this currency pair to descend into its primary ascending support level. Forex traders are advised to spread their USDNOK sell orders inside the horizontal resistance area. 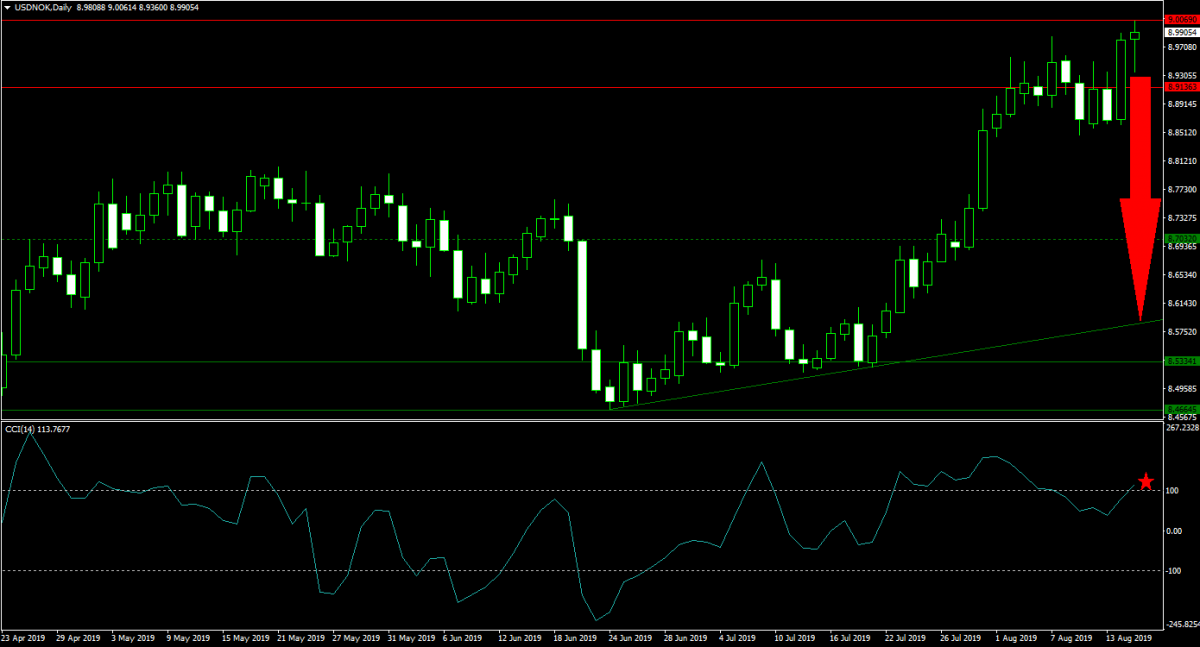 The CCI is trading in extreme overbought territory where a negative divergence formed, suggesting downside potential for this currency pair. This momentum indicator is favored to reverse direction from current levels. Follow the PaxForex Daily Forex Technical Analysis and simply copy the recommended trades of our expert analysts into your own trading account!