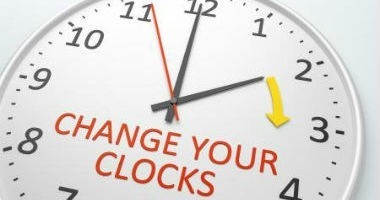 Don’t forget to change your clocks! On the night of October 26 (Saturday to Sunday) many countries of the world will move the clock to one hour back. Thus, as early as this weekend the "winter time" officially will come. However, not all countries do it this weekend, so follow your local news to be sure.

First clock’s moving to one hour forward in the summer and one hour back in the winter in order to save energy resources was carried out in the UK in 1908. The idea of energy savings by clock moving belongs to the American statesman, one of the authors of the U.S. Declaration of Independence Benjamin Franklin (1706-1790). In the United States clock changing is used since 1918.

Currently, seasonal Daylight Saving Time shifts are carried out in 78 countries and at all latitudes, from Canada to Australia.

In Europe, the transition to winter time is conducted not by the local time but Greenwich Mean Time (GMT), or, more precisely, by Coordinated Universal Time (UTC). This means, for example, that London and Lisbon change clock at 2 AM local time, while Paris, Berlin and Rome do the same at 3 o'clock local time.

Of all the European countries, only Iceland does not take advantage of summer time, being in the same time with GMT throughout the year, and for an hour behind the London during summer.

Since 2007, the United States and Canada the daylight saving time change takes place in the second Sunday of March at 02:00, and comes back in the winter’s time in the first Sunday in November, also at 02:00. In northwestern Ontario residents refuse to move the arrows in the summer, as well as some parts of the provinces of Quebec, British Columbia. The states of Hawaii and Arizona also decided not to touch their clocks.

161 countries and territories do not make clock changes to summer/winter time. Among them are Algeria, Angola, Afghanistan, Vietnam, Guinea, India, Kenya, Malaysia, the United Arab Emirates, Pakistan, Peru, Tunisia, the Philippines, both Koreas and Japan.

In Central America and the Caribbean, time’s moving takes place in most parts of Mexico, Cuba and a number of small island states. Guatemala, Nicaragua, Panama, Venezuela, Colombia remain the time unchanged.

Japan renounced daylight saving time in 1952. This was due to the fact that it was introduced by the occupation authorities, who ruled the country from May 1, 1948 and didn’t take approval of a majority of the Japanese population.

Australia was one of the first countries in the world that in 1917 decided to switch to daylight saving time. However, not all administrative units of the country are making the transition. Located in a tropical climate, Northern Territory and Queensland believe DST impractical and unprofitable.

In the Russian Federation clock’s changing will take place on the night of October 26 (Saturday to Sunday). It should be noted that the transfer of hours in October 2014 will return the majority of the inhabitants of the regions of Russia to the "winter time", and this process will be made for the last time.