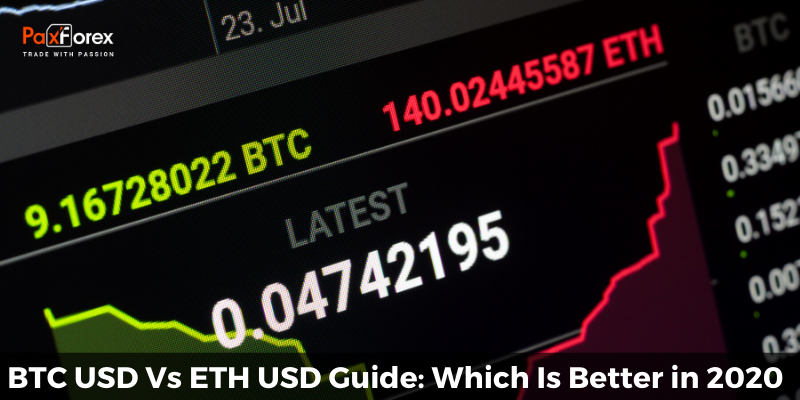 It’s hard to believe, but before 2009 the discussion on trading cryptocurrencies simply didn’t exist. However, shortly after Bitcoin rolled-out as the pioneer crypto-coin, a lot of others followed in its footsteps. And while following the progress of the Bitcoins to US dollars is somewhat straightforward, keeping track of every new cryptocurrency pair can get overwhelming.

In fact, the tremendous rate with which the new cryptocurrencies enter the market is one of the biggest reasons for traders’ confusion. That’s why we are taking the next few moments to compare the pairs of BTC USD and ETH USD, to better understand how they can benefit traders in 2020 and beyond. Let’s start by quickly summarizing the pairs.

As many know, Bitcoin was the first cryptocurrency on the market. A group of anonymous developers developed BTC in 2008 and made it available to the general public in 2009, after releasing is as open-source software.

The most significant appeal of most of the first Bitcoin to US dollars was the fact that cryptocurrency operates without a central bank. This decentralization opens a whole pool pf possibilities to people who wish for their transactions to stay incognito, which played a big role in cryptocurrencies’ questionable reputation as the money of the dark markets.

It’s also a known fact that BTC to USD didn’t pick up right away. Whether it was the overall unreadiness of the public towards the currency of the future or the lack of understanding of blockchain technology, BTC to USD exchange rate started at insignificant amounts of 30 cents per coin, ranging up just a couple of bucks in a year. By 2017, however, the price for one BTC reaches nearly $1000, and that was the start of its historic climb.

Although Bitcoin is the most famous cryptocurrency, Ethereum takes up the runner up spot, being second-largest by capitalization after BTC. Ethereum serves as a platform for nearly three hundred thousand of other cryptocurrencies, 47 of which are on the top 100 list by market capitalization.

The history Ethereum in general and ETH to USD, in particular, is full of rather dramatic events. For example, in June 2016, $50 million worth of Ether got taken by an unknown hacker, which sparked a heated discussion in the crypto-community. As a result, the Ethereum network split in two, with one of the split halves making the ETH we all know and trade today.

Evaluating the Long-term Potential of BTC USD and ETH USD 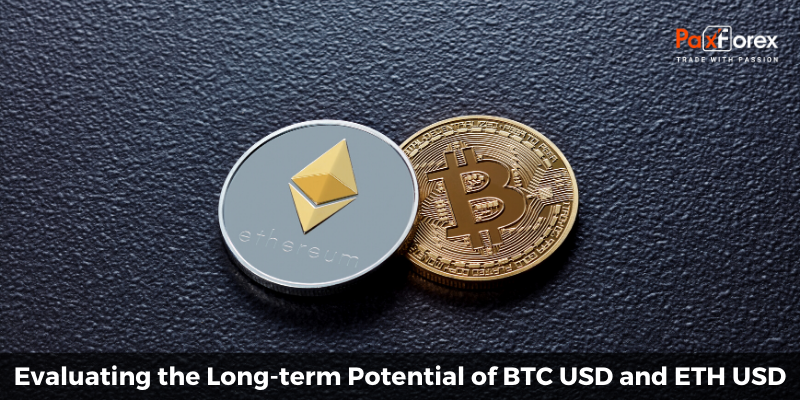 Bitcoin to US dollars pair went through an unprecedented climb in 2017. In December 2017, BTC reached its absolute high of $19,891 per one Bitcoin. The previous events looked more like a snowball of reaction waves from traders around the world. Since then, Bitcoin to US dollar pair is always in the center of attention of all progressive traders.

Although BTC USD went through a rough patch over the winter of 2018-2019, with its value resolving around $3,000, the cryptocurrency picked up once again, reaching $11,000 in July 2019 and over $12,000 in August 2020. The fresh peaks gave the trading experts a lot of ground to bet on BTC. The majority of crypto-traders are confident that the BTC USD absolute high is ahead of us.

While the ETH to USD journey was less significant, it actually sort of mimicked the Bitcoins to US dollars leaps in 2018. Starting from just under $10 in January 2017, Ethereum to US dollar went up to $1,380 in January 2018, opening an entire window of promising opportunities to traders who did not have the resources to participate in the BTC USD race.

In terms of the long-term forecasts, Bitcoin is likely to continue to lead, mostly due to its sheer popularity. When we put the Bitcoin to US dollars and Ethereum to US dollar charts side by side, we can observe bullish tendencies on both. However, Bitcoins uptrends are both more volatile and more potent than the Ether’s. But will BTC lead forever?

Considering the Leadership Role of BTC to USD

The higher is the rise — the harder is the fall. As we observed, Bitcoin went down from skyrocketing $19 thousand to $3k. It won’t be totally unfair to say that it might not be its last misfortune. But at the same time, BTC USD is very likely to hold on to its leadership post.

After the events of early 2020, with the global pandemic turning the world upside down, global investors and especially the high-net-worth investors began the search for alternatives to the traditional safe-havens such as commercial real estate, for example. Cryptocurrencies were already mong the noteworthy investment portfolio candidates and got the rightful boost from the new reality of self-isolation.

This way, Bitcoin to US dollar pair became a perfect solution: the greenback is the most liquid currency in the world, and Bitcoin — the most liquid in the virtual world. According to the trading industry insiders, it will be long before BTC will step back, as long as the events continue to unravel the same way they do now.

But to get an even more in-depth understanding of how BTC to USD differs from Ethereum vs US dollar, we should get slightly more technical. Next, let’s take a look at the particular differences between the two leading cryptocurrencies.

Outlining the Differences Between Cryptocurrencies 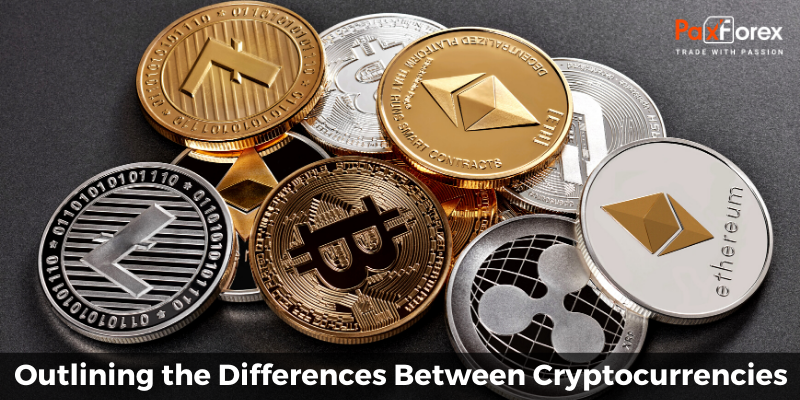 Although the term ‘cryptocurrency’ seems to unify each and every coin under the same concept, there are actually a lot of differences between these currencies. The primary area of distinction is highly technical.

Every cryptocurrency has its own set of rules when it comes to the procedures behind its creation, distribution, and security. While it might not matter during the actual trading process, getting familiar with technical specifics can give you an upper-hand in analyzing and forecasting the crypto-based pairs. Plus, knowing your instrument and consciously preferring it over others can be a great asset to any trader.

So, to trade Bitcoins to US dollars it makes sense to comprehend the mechanics of BTC, as well as the dollar. Find out the basic trading facts about USD in our foreign currency guide. As for the Bitcoin, the main idea behind its formation is a peer-to-peer decentralized payment system with special emphasis on enhanced security of the mining process.

Bitcoin mining gets done by specially-designed computers. The miners secure a network and process every BTC transaction by solving a computational problem. This solution process ultimately chains together transaction blocks, hence the name ‘blockchain.’ It takes roughly about 10 minutes to form one block for Bitcoin. An interesting fact about Bitcoin mining is that the total supply is limited at 21 million BTCs.

Ether, on the other hand, offers more than just a payment system. According to the Ethereum Project themselves: “Ethereum is a decentralized platform that runs smart contracts: applications that run exactly as programmed without any possibility of downtime, censorship, fraud or third-party interference.”

While Bitcoins are mined, Ether is a token of payment for various tasks that secure the network. A good example would be purchasing a house with Ether. Instead of going through multiple middlemen, such as lawyers, brokers, and insurance agents, a buyer would secure the transaction through the network of contacts that operate by ‘code as law’ principle.

Ethereum is capped each year, which means there is no limit to how much Ether could be out there, and it currently takes just under 14 seconds to form one block. Moving on, let’s quickly consider some of the factors in keeping an eye on ETH USD and Bitcoin to US dollars. 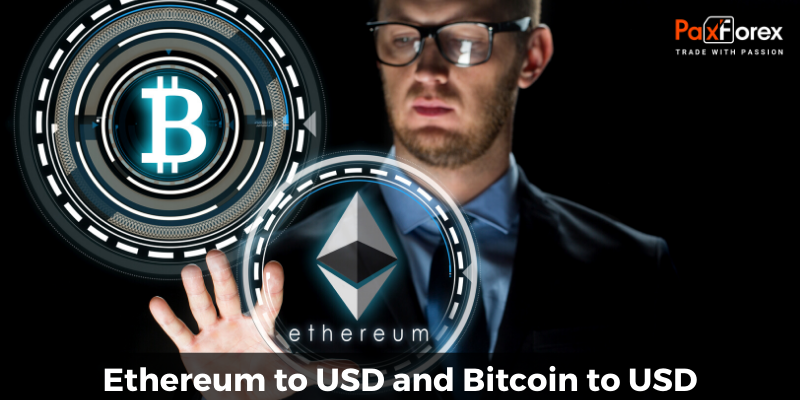 Earlier, we discussed a hacker getting possession over $50 million worth of Ether. Events such as this one often result in hard forks in the cryptocurrency’s behavior, and consequently — the according price reactions. That’s why monitoring the progress of the currency you chose can be very helpful in estimating its future values.

For example, in 2017, the Bitcoin hard forked into Bitcoin Cash in order to increase the size of the block limit. The requirement for size enhancement came from the realization that a vast majority of BTC investors were choosing to treat the cryptocurrency as a form of digital investment, not as a transactional instrument. The introduction of Bitcoin Cash spiked the BTC USD movement and raised the value of the BTC by $1000.

By comparing price reactions to ETH and BTC forks, we can conclude that Ether is visibly more stable when it comes to extreme turbulence. Although such stability may not always be beneficial for fast-pace traders, the position traders will undoubtedly appreciate its advantages.

Making long-term predictions on the cryptocurrencies’ movement, studying its structure, and understanding how its technology stands out from others are all crucial contributors to the fundamental analysis. However, the purely technical factors, such as volatility, can also play a significant role in both BTC USD and ETH to USD trading processes.

Volatility is the engine behind the trader’s profits, only due to the fact that slow-moving pairs cannot offer as many opportunities. By analyzing the Ethereum vs US dollar chart over several different time frames, you can get a pretty solid understanding of how rapidly the cryptocurrency’s value can change.

Apart from the volatility, the chart can also provide an insightful scope of the currency’s individual behavior. The characteristics of each currency and each pair will reflect in the most favorable trading times, the rates of trading volume, the range between open and close, and much more. By noticing the similarities in chart patterns, looking out for repetition, and highlighting unusual moments, and it can be easier to successfully forecast upcoming price changes and therefore trade more successfully.

So, which is better to trade in 2020: BTC USD or ETH USD? The answer is both and a lot more others. Both Bitcoin and Ether offer sufficient levels of volatility and engaging price movement for fruitful trading. The best advice for choosing a correct instrument is to do your homework and observe how the pairs behave over extended periods.

This observation will include every point from above: using fundamental factors to build long forecasts, comparing the technical data, getting to know the formation and distribution mechanisms in closer detail, and a lot more. At the end of the day, every trader decided which pair to trade from the perspective of their own preferences. But it will never hurt to back that preference up with some stone-hard facts.